While debate rages over the hallmarks and advantages of fifth-generation fighters, Boeing is preparing to deliver the next generation of its long-running F/A-18. The F/A-18E/F Block II+ Super Hornet is the culmination of a fundamental upgrade of the multi-role fighter and the foundation for future capability expansion.

Next-generation Super Hornet deliveries to the US Navy will begin later this year when the first aircraft from production Lot 30 rolls off the St Louis, Missouri assembly line. "Lot 30 is the launch point for Block II+," says Kory Mathews, director of F/A-18 programme integration. 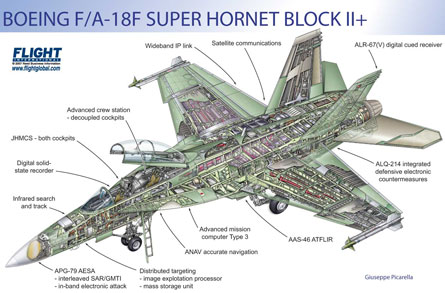 Today's F/A-18E/F Super Hornet was developed from the original F/A-18 Hornet in two stages: first an airframe and engine upgrade that scaled the fighter up by 25% to increase range, payload and growth capacity then a multi-phase avionics update that introduced advanced sensors.

Lot 30 is the first time the structural upgrade that produced the F/A-18E/F comes together with the full suite of advanced avionics, and is the jumping-off point for the Capability Flightplan - a roadmap of enhancements planned to be developed and fielded over the next decade.

"We have a robust, well-defined capability roadmap in four main areas: distributed targeting, net-centric operations/battlespace management, sensor integration and advanced weapons," says Mathews. The Flightplan covers fiscal years 2008-2014, and will be updated annually. "It is a living document," he says. "We can add, accelerate or eliminate capabilities."

The launching point for the Capability Flightplan is the avionics architecture implemented incrementally since deliveries of the Block II Super Hornet began in 2005 with production Lot 26, and fully realised beginning with Lot 30.

"Beginning with Lot 30, every aircraft will have AESA," says Mathews. Until then, some F/A-18E/Fs are being delivered with the earlier mechanically scanned APG-73 radar. The US Navy plans to retrofit 135 APG-73-equipped Block II Super Hornets with APG-79, for an eventual total of 415 AESA-equipped aircraft.

The Raytheon AESA brings the capability for simultaneous air-to-air and air-to-ground operation and, starting with Lot 30, two-seat F/A-18Fs will have the advanced crew station, which decouples the front and rear cockpits. "The front-seater can sanitise the airspace while the rear-seater conducts an air-to-ground campaign," says Mathews. Both crew members will have the joint helmet-mounted cueing system.

Another step in expanding the Super Hornet's precision attack capability has already been taken with fielding of the digital sold-state recorder. Replacing an analogue cockpit video recorder, the DSSR brings the capability to grab and store sensor images, and send them over existing communications links - either Link 16 or the ARC-210 digital radio.

"On ingress, the crew can see ATFLIR streaming video in the cockpit, frame-grab a still image of the target and datalink it to the forward air controller, who looks at the image, annotates it with Blue Force positions and datalinks it back," Mathews says, cutting the time needed to "talk" the aircraft to the target to "low-digit minutes".

With the Lot 30 aircraft as a starting point, the Flightplan lays out a roadmap for expanding the F/A-18E/F's precision-engagement and battle-management capabilities. Much of the focus is on air-to-ground operations, but the Super Hornet is to get an infrared search and track (IRST) sensor to increase air-to-air capability.

Development of the IRST is funded beginning in FY2008, leading to fielding in 2012-13, says Mathews. A targeting, not imaging sensor, the IRST will be integrated with the radar to provide spectral diversity and the ability to engage passively air-to-air. Although it could be mounted internally, a podded sensor is more likely, he says.

Under the Flightplan, the distributed targeting area involves the addition of an image exploitation processor and mass storage unit to allow sensor information such as synthetic-aperture radar (SAR) imagery to be manipulated rapidly. The first increment will build on the AESA and ATFLIR targeting capability by georegistering imagery to an onboard database to generate precise target co-ordinates.

"This will bring precision targeting for weapons on board the aircraft and provide nearly range-independent, pixel-level accuracy in the cockpit," says Mathews. The next step will extend the capability to multiple and moving targets. A mode will be added to the AESA enabling interleaved SAR and ground moving-target indication, allowing the system to georegister moving targets and update their positions.

"Combine that with a weapon datalink and you will be able to release a weapon on the initial co-ordinates and update it in flight as the target moves. We will be able to engage multiple movers, stand off, in all weathers," Mathews says, adding that the final part of the distributed targeting roadmap will add features such as automatic target cueing and aided target recognition to reduce crew workload.

The net-centric operations area of the Flightplan focuses on augmenting the communications links on the aircraft. "More and more they will use the aircraft for non-traditional ISR [intelligence, surveillance and reconnaissance] because of its state-of-the-art sensors, and it needs to communicate with anyone inside or outside the theatre," says Mathews.

Two new links are to be added to the aircraft. A wideband IP (internet protocol) link will provide a "bigger pipe" for streaming video and voice-over-IP using ad hoc networks, compared with the narrowband, pre-established Link 16 networks. The second link will be beyond-line-of-sight satellite communications.

Development of the wideband IP link is scheduled to begin in FY2010, followed in FY2012 by the satcom system. The EA-18G Growler electronic-attack variant of the Super Hornet has receive-only satcom, but the new system will transmit and receive voice and data, says Mathews.

The third area of the Flightplan, multi-sensor integration, will exploit capabilities inherent in the Block II+ Super Hornet by rolling out software upgrades that tie onboard sensors more tightly together and with offboard sensors. As well as the AESA and ATFLIR, onboard systems include the ALR-67(V)3 radar warning receiver, also made by Raytheon, and the BAE Systems ALQ-214 integrated defensive electronic countermeasures system (IDECM).

The ALR-67(V) is a digital cued receiver, and under the Flightplan its capability will be enhanced to allow single-ship geolocation of emitters with enough accuracy to cue the radar for targeting, says Mathews. The capability for multi-ship geolocation using three F/A-18E/Fs, accurate enough for passive targeting, will also be introduced.

Some of most powerful sensor-integration capabilities planned involve the AESA and exploit its ability to act as more than a radar. The first of these is planned to be electronic attack, which will involve using the nose-mounted array of solid-state transmit/receive modules as both a highly sensitive passive emitter locator and enormously powerful directional jammer.

Mathews cautions that the AESA is limited to in-band electronic attack, and in its field of view and field of regard as both a receiver and jammer, but the system promises to be a powerful weapon against other X-band radars in aircraft and missiles. Multi-sensor integration will tie the AESA together with the ALR-67(V) receiver for cueing and the IDECM for jamming techniques generation.

Although the capabilities outlined in the Flightplan will be developed and fielded over a decade or so, the US Navy plans to upgrade all of its Block II Super Hornets to the Block II+ standard. Block I aircraft will also receive upgrades, but will not be retrofitted to the same standard because they lack the new forward fuselage introduced with Block II and cannot accommodate the APG-79 AESA.

The US Navy, meanwhile, is looking at increasing procurement of F/A-18E/Fs beyond its planned 460 aircraft to offset the delay in Joint Strike Fighter initial operational capability to 2015. The Flightplan is designed to ensure, whatever its generation, that the Super Hornet stays at the leading edge of operational capability.