A Norwegian fighter pilot has published a soft rebuttal to a damaging critique leaked last summer about the Lockheed Martin F-35A’s dogfighting prowess, contradicting many of the critical points made in the scathing review written by another test pilot.

Royal Norwegian Air Force Maj Morten “Dolby” Hanche, a US Navy test pilot school graduate with 2,200 flight hours in Lockheed F-16s, has flown several mock dogfights from Luke AFB in Arizona since becoming the nation’s first F-35 pilot last November. These have yet to advance to performing "dissimilar" training against other aircraft types.

But it is clear that Hanche’s review seeks to shoot down the anonymous pilot's many complaints about the F-35, which have been cited by Republican presidential candidate Donald Trump, who has vowed on the campaign trail to cancel the Joint Strike Fighter programme. 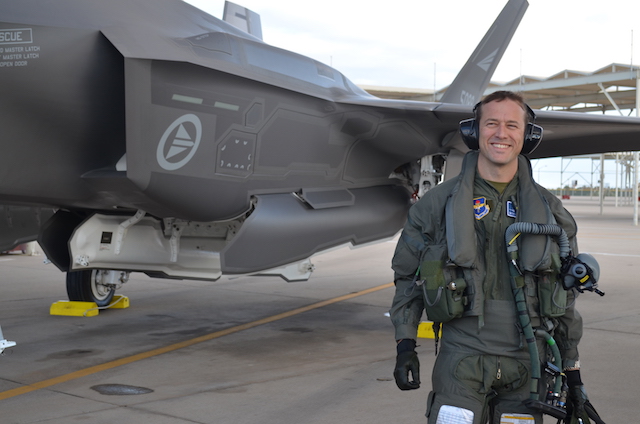 That year-old leaked report described in detail a single flight on 15 January 2015 in which a test pilot – a veteran of Boeing F-15 and F-16 cockpits – ridicules the F-35A as dangerously lacking power after high angle of attack manoeuvres, putting the aircraft at a “distinct disadvantage” in mock dogfights with an F-16 Block 40 loaded with two external fuel tanks.

By contrast, Hanche writes on the MoD’s official blog that he is “impressed by how quickly the F-35 accelerates when I reduce the [angle of attack]”, suggesting the aircraft instead rapidly regains energy after “breaking” to a near stop with its nose pointed up to 40˚ high in mid-air.

Hanche also writes that the F-35 can tilt its nose upward under control beyond the ability of the F-16. Even at these extreme angles, the pilot can still “point” the nose easily by simply tapping the rudder pedals, Hanche says, adding that he is “impressed with the stability and predictability of the airplane”.

That again puts Hanche’s review at odds with the leaked test report. The previous test pilot complained that the controls of his particular F-35A – the AF-2 prototype – felt, by turns, sluggish, counter-intuitive and non-responsive in twisting maneouvres with the F-16 Block 40.

In one area, Hanche and the criticaltest report share similar concerns about the F-35’s cockpit visibility, but come to different conclusions about the scale of the problem.

Both pilots agreed that the head rest makes it harder to look for targets behind the aircraft. But the Norwegian pilot suggests that the other test pilot over-stated the problem after a single flight experience. By learning to tilt forward in his seat before looking behind, Hanche makes the point that he found a way to mitigate the visibility problem through trial and error after a few flights.

Hanche also makes another point that may seem surprising nearly a decade after the first F-35A prototype completed first flight. Due to several programme delays, the US Air Force is still learning how to use the F-35A in combat. Initial operational capability for the variant is scheduled later this year.

“The final ‘textbook’ for how to best employ the F-35 in visual combat – basic fighter maneouvres – has not been written yet,” Hanche says. “It is literally being written by my neighbour down here in Arizona!"

CORRECTION: The original story is updated to reflect that the author of the critical test report was not a Lockheed Martin pilot.