The US Department of Defense has confirmed it will place two squadrons of its Lockheed Martin F-35s at RAF Lakenheath, marking the first confirmed European basing of American Joint Strike Fighters.

The RAF base in Suffolk will house two US squadrons in order to maintain the USA’s air power presence in the UK. The fighters are expected to be on-station around 2020.

“Today we announce that we will permanently place the F-35 in Europe,” Derek Chollet, Assistant Secretary of Defense for international security affairs at the DoD, told a press briefing at the Pentagon on 8 January. “The presence of the F-35 at Lakenheath will allow for greater training and wider support,” he adds. 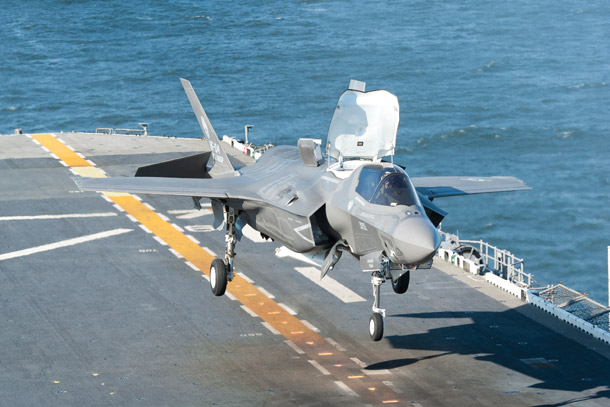 In parallel with announcing F-35 overseas basing, the DoD also revealed plans to consolidate some of its personnel and assets presently stationed in Europe.

The most significant decision made was to pass RAF Mildenhall in Suffolk back to the RAF, and relocate US units based there to other areas in Europe.

RAF Alconbury and RAF Molesworth in Cambridgeshire will also be divested, with a large part of the bases’ operations transferring to RAF Croughton in Northamptonshire.

The DoD’s European Infrastructure Consolidation (EIC) review began two years ago, aiming to establish how bases abroad could be streamlined to reduce obsolescence and provide cost savings, leading to the closures.

The reorganisation will save an estimated $500 million per year, but is expected to cost some $1.4 billion to implement. Full implementation is expected sometime between 2018 and 2021.

Mildenhall’s Boeing KC-135s and the 352nd Special Operations Group – including a fleet of Bell Boeing CV-22 Osprey tiltrotors – are expected to move to Germany, while its Boeing RC-135s will be relocated elsewhere in the UK. Italy is expected to house the 606th Air Control Squadron as it relocates from Spangdahlem, Germany, while the US presence at Lajes Field in Portugal will decline in size.

“European and transatlantic security is more important than ever,” Chollet adds.

He claims infrastructure basing in Europe is “indispensible”, yet “at the same time we must pursue these goals in a way that is as efficient as possible”.

Some 3,200 personnel are stationed at Mildenhall, and it is unclear where job cuts will be made, although Chollet admits some positions will be lost.

However, the losses from Mildenhall and the other closed bases will be offset by the employment of 1,200 personnel to support the F-35 squadrons based at Lakenheath, he adds.

The DoD – including Secretary of Defense Chuck Hagel – has been in discussions with affected countries to discuss ways to overcome any negative consequences of the restructuring to the local areas within each nation.

The RAF, meanwhile, has eight of a 138-strong requirement of F-35Bs on order, including three that have already been delivered to Eglin AFB in Florida. The UK fighters will eventually be based at RAF Marham in Norfolk.