The US Naval Research Laboratory (NRL) is developing a mass swarming micro UAV intended for bulk distribution on battlefields to carry out electronic intelligence gathering and a ready-made battlefield communications network for advancing forces.

NRL says the close-in covert autonomous disposable aircraft – or CICADA – is essentially a “flying printed computer circuit board” which folds for storage and transport. Several thousand of the gliding UAVs would be packaged together, and carried into a theatre by a transport aircraft for simultaneous release.

The development programme was unveiled at the Association for Unmanned Vehicle Systems International’s Unmanned Systems North America exhibition in Orlando, Florida, at the end of August, with NRL showing a single initial prototype.

Each ‘board’ incorporates a flight control suite with integrated Global Positioning Satellite (GPS) guidance, micro-electrical mechanical (MEMS) actuators to support unfolding and operate control surfaces, a power source, a miniature communications system, and a miniature electronic intelligence gathering sensor. In stored form the UAVs would abut each other, with standard contact surfaces printed on the outer skin to provide a data network via which thousands of UAVs could be programmed simultaneously while in transit to an area of operations. 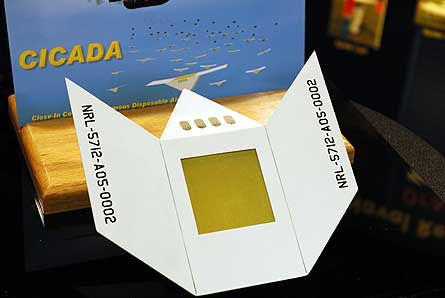 Current packaging concepts suggest that 18 individual CICADA could be fitted into a 150mm (6in) cube. A standard US Air Force ‘Sergeant Fletcher’ stores pod as carried by a Lockheed Martin C130 Hercules aircraft could carry 9,800 of the UAVs in a single lift. That number could “seed” an area of 4,800km2 (1,850miles2) in 25min.

The 20-30g (0.7oz-1oz) CICADA air vehicle is inherently stable says NRL, meaning it matters little if they collide during deployment. Each air vehicle has a glide ratio of 3.5 and flies at 50kt (92.5km/h). The current demonstrator model has a span of 210mm (8in) with wind tunnel testing currently underway to optimise the design.

The bulk programming process assigns each UAV a designated landing point in the target area being “seeded”. On landing the upper wing operates as an antenna, with multiple UAVs synchronising to establish a common distributed network. The UAVs could operate as collectively to provide a single very large array for electronic intelligence gathering purposes says NRL, or as a constellation of localised intercept stations which would provide enhanced localisation given the sheer number of nodes carrying out monitoring.

NRL says it launched the development effort last year after receiving a five year funding green light for the concept. The UAV system is the forty-fourth developed by the laboratories.

Payload development is well advanced with shock testing on prototype electronic warfare sensors to be conducted during September-October this year. Flight control system testing using a surrogate air vehicle has already been carried out.

The project has a production target price of $100 per individual UAV. The current autopilot system costs $90 a unit, NRL says, meaning the objective system price should be achievable.

At least two derivative versions have already been flagged. The first would replace the upper wing antenna with a low cost loudspeaker which could be used as a psychological warfare broadcast system in enemy occupied territory. The second is a version design for carriage in 120mm artillery shells, with this featuring a circular wing as opposed to the basic shaped ‘circuit board’ design.

Other concepts include derivatives that could be fitted into standard aircraft electronic warfare chaff and flare dispensing systems.