The US Air Force says it needs 41 new helicopters to help guard and escort nuclear-tipped intercontinental ballistic missiles, more than 400 of which are on alert at three air force bases in America’s far north.

The service currently fields 25 UH-1N Hueys in that role, and the service has disclosed for the first time that it plans to bump that number up to 41 helicopters.

Testifying before Congress on 16 March, USAF military deputy for acquisition Lt Gen Arnold Bunch confirmed that number, which might be sole-sourced to Sikorsky for the UH-60M Black Hawk at a cost of $1.4 billion in 2015 dollars, or $34 million each.

Bunch confirmed that the air force is weighing how desperately those Huey replacements are needed, because any sole-source deal could meet resistance from the “five potential industry sources” that are examining that requirement or from lawmakers in states whether those alternative aircraft are built.

One congresswoman warned at the hearing on army and air force rotorcraft modernisation efforts that the air force would need to make a strong argument for skipping a competition – at the expense of potential sources like Bell Helicopter, Finmeccanica and Airbus Helicopters.

According to budget documents, the service has a requirement for 72 aircraft in total to replace its 62 outdated UH-1Ns that entered service 43 years ago. The second requirement would be for a more general-purpose rotorcraft to ferry US government officials around Washington DC as well as support base transport, helicopter training and weapons development and testing. 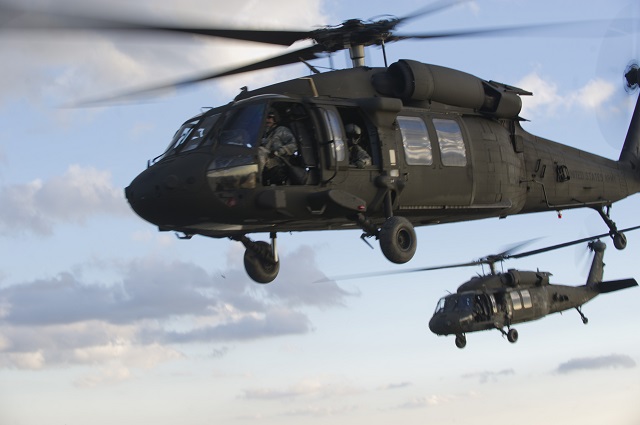 Speaking at a Lockheed Martin function this week, Sikorsky vice-president of commercial systems and services Dana Fiatarone said buying UH-60Ms is the quickest and most cost-effective way of procuring all 72 required helicopters, particularly those needed for Minuteman III ballistic missile security operations.

“They’ll be able to leverage the army’s buying power by buying off that multiyear [contract],” he says. “That’s a very significant advantage from a cost and schedule standpoint.”

The air force will decide within weeks on whether to break up that 72-rotorcraft requirement, acknowledging that the nuclear mission is the greater need and will take priority. A competition is likely for the remaining 31 or more aircraft at a later date.

UPDATE: This story previously noted that the air force’s cost estimate for 41 Black Hawks is $800-900 million, as stated at the hearing, but a service spokeswoman says the general misspoke and the true cost is $1.4 billion.