As US Air Force Global Strike Command anticipates the introduction of the nuclear-capable Long-Range Strike Bomber in the mid-2020s, the command is de-arming its air-launched cruise missile-carrying Boeing B-52 bombers to comply with New START treaty limits with Russia.

The command announced last week that 30 B-52Hs, all veterans of the Cold War, would be modified as conventional heavy bombers, in line with verifiable treaty standards.

According to a 17 September statement, the first aircraft to shed its nuclear capabilities was tail number 61-1021 of Air Force Reserve Command’s 307th Bomb Wing at Barksdale AFB, Louisiana.

The conversions should be complete by early 2017, the air force says, and interestingly the service also intends to revive a dozen non-operational B-52H aircraft in storage at the boneyard in Arizona.

“The conversion process preserves the full conventional capabilities of the B-52,” the service says.

The air force is whittling down its nuclear-capable bomber force to about 60 B-52s and Northrop Grumman B-2s, as per the force mix announced in 2014. The Boeing B-1B is already non-nuclear. 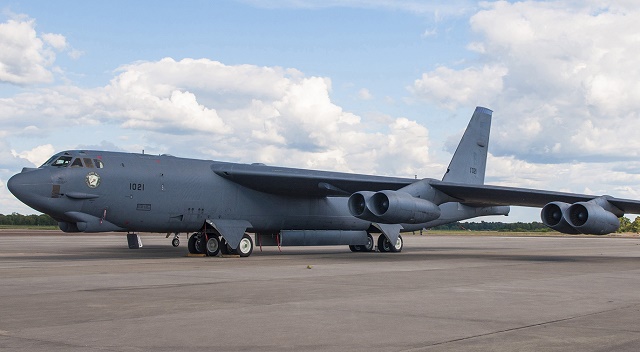 The first of 30 B-52H bombers to be stripped of its nuclear weapons capability.

Despite having fewer nuclear-capable bombers, Global Strike Command is currently going through a re-branding exercise following a series of high-profile nuclear stuff-ups including revelations last year that dozens of missileers were cheating on routine nuclear proficiency tests.

Senior air force leaders have been trying to reinstate the professionalism and prestige of the nuclear deterrent force exemplified by SAC under legendary Cold War commander Gen Curtis LeMay, who ran the organisation from 1948 to 1957. In fact, Rand recently moved LeMay's old desk into his headquarters office.

On 1 October, the command will take control of the B-1B despite its conventional role, giving it responsibility for training and equipping the entire US long-range bomber force.

In another New START compliance measure, the service is also reducing its number of active Minuteman intercontinental ballistic missiles from 450 to 400, with those 50 missiles being removed from their silos and placed in standby mode.

Despite heightened tensions with Russia, which is currently outpacing the West in terms of nuclear modernisation, both sides see the New Strategic Arms Reduction Treaty (START) that comes into full force 5 February 2018 as being mutually beneficial – particularly at a time of strained relations.

Under the treaty, each side is limited to 1,550 nuclear warheads and a total of 700 deployed launchers, namely land-based ICBMs, submarine-launched ballistic missiles and heavy bombers.

Along with the introduction of LRS-B, the air force is also planning to field the Long-Range Stadoff (LRSO) cruise missile and GPS-guided B61-12 thermonuclear bomb.