A major engine upgrade for the Boeing F/A-18E/F Super Hornet fleet is being seriously considered by the US Navy for a programme launch in Fiscal Year 2016.

GE Aviation and the navy jointly funded a one-year study – which kicked off last October – to examine the details of implementing a nearly 15-year-old proposal to upgrade the F414-GE-400 with the “enhanced durability engine” (EDE) kit.

Following a decade of component and rig testing and several false starts on the export market, the study may be GE Aviation’s best hope of salvaging a programme that could improve the thrust of the Super Hornet and EA-18G Growler fleet by one-fifth.

Meanwhile, a US Navy-funded F414 upgrade programme could also boost the competitive position of the F414 over the rival Eurojet EJ2X0 – an upgraded variant of the Eurofighter Typhoon’s EJ200 – as new medium-sized, twin-engined fighters are proposed in Japan, South Korea and Turkey.

“If what we expect comes out of [the study], the need is there and the budgets line up, the next step is going to be to go ahead and start working on the detailed design of the engine,” says Jim Caplan, director of F404/F414 programmes for GE Aviation.“I believe they are looking at it as a potential [FY2016] programme.”

The engine upgrade decision comes at a pivotal time in the 22-year history of the Super Hornet and Growler programmes.Once-promising export leads for the F/A-18E/F in Brazil and India have dried up, and a foreign launch order for an advanced version of the aircraft – featuring the F414 EDE upgrade – does not appear likely in the near-term. 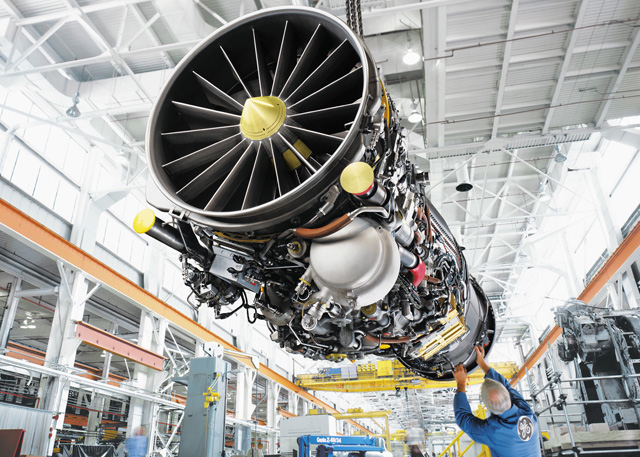 Last October, the navy issued a pre-solicitation notice for the possible purchase of up to 36 more F/A-18E/Fs in FY2015. However, the notice was later cancelled after a Flightglobal news report disclosed the potential deal. Naval Air Systems Command officials said the document was released prematurely.

The Obama administration subsequently unveiled the FY2015 budget request in February, but no funding for more EA-18Gs or F/A-18E/Fs was included.

The navy has since added a request for 22 more EA-18Gs to the top of its unfunded priorities list. Congress could add funding to buy the additional aircraft, but this is far from guaranteed.

As the budget debate unfolds, the navy is also considering how it should maintain its current fleet of F/A-18E/Fs and EA-18Gs.

The engine upgrade is one of a package of modifications Boeing has offered to international customers for several years.Besides the engine, the most significant update proposed for the F/A-18E/F is a signature reduction package.

The Super Hornet in combat configuration carries weapons and external fuel tanks under its wings, but that payload makes it easier for radar to detect the fighter.

Boeing proposed reducing the fighter’s radar signature by replacing the wing-mounted fuel pods with conformal tanks installed on top of the fuselage. In addition, the airframer designed a conformal weapons bay in a container that greatly reduces the fighter’s profile on radar.

However, the upgrade requiring the most internal changes – and offering the biggest advancement in performance – are modifications to the fighter’s pair of 22,000lb-thrust (99kN) F414-GE-400s.

The navy can programme the full authority digital engine control system to upgrade the power output of the F414 EDE engine to around 26,400lb-thrust. The same changes can dramatically improve the engine’s durability if thrust output is maintained at the 22,000lb-thrust baseline.

The latter option also offers a 3% improvement in fuel efficiency, and up to $5 billion cost savings over an engine’s lifecycle – including reduced fuel and maintenance costs, GE’s Caplan says.

But the navy could also be tempted – if the F414 EDE programme is launched – to seek a thrust upgrade, which includes a doubling of acceleration power.“That gives you options in terms of future threats and aircraft capability,” Caplan says. 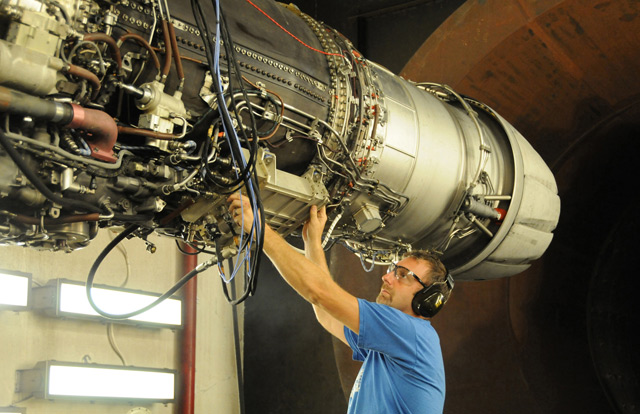 The trade-off with upgrading the engine to produce 26,400lb-thrust is a considerable hike in maintenance costs. Running the F414 EDE at the higher thrust setting reduces turbine life to 2,000h, Caplan says. This is just one-third of the current 6,000h interval.

The upgrade itself mainly targets three of the six modules inside the engine – the fan, the high-pressure compressor and the high-pressure turbine.However, the dramatic thrust improvement is made possible by Boeing’s original design of the air inlet.

The inlet is sized to ingest up to 84.8kg/s (187lb/s) of air into the engine fan. However, the fan can only absorb 77.1kg/s of airflow, which artificially reduces the aircraft’s maximum thrust capability.
The F414 EDE addresses this gap in capability by making subtle but important changes to the inlet fan, to increase air flow to the maximum level of 84.8kg/s.

The three-stage fan is currently comprised of a traditional hub-and-blade configuration for the first stage, and integrated blades and discs – or blisks – in the second and third stages.
The proposed upgrade replaces the first stage with a blisk, Caplan says. A blisk reduces the diameter of the hub, thereby creating space for ingesting more air. Finally, GE is “re-tuning” the second- and third-stage fan blades to accommodate the additional mass of air, Caplan adds.

Aft of the fan module, the configuration changes are more dramatic. The F414 EDE proposes to reduce one stage of compression from the high-pressure compressor, leaving six stages to achieve the desired overall pressure ratio of airflow entering the combustion chamber.

To replace the foregone compression stage, the compressor blades will be redesigned with modern 3D aerodynamic techniques, which are often characterised by wider-chord and thicker blades, with more elaborate twisting or bowing.

A perhaps overlooked benefit of 3D shaping is the improved tolerance of the blades to damage from foreign object debris (FOD) ingested upstream, he adds.
“Because of 3D aero the leading edge of the blade is a little more rounded than the current blade, so that results in it being more FOD-tolerant,” Caplan says.

As a result, the F414 EDE configuration features new cooling techniques. The turbine blades are already moulded with internal passages that channel cooling air siphoned from cooler parts of the engine, upstream of the combustor. However, the new design incorporates “different techniques” that Caplan is not authorised to describe in detail.

“It has to do more with the internal design of the blade,” he says. “Heat is evenly distributed and very consistently removed from the blades, with no thermal gradients. There are improvements in coatings as well.”

GE also has the option of switching to a more heat-resistant material to make the blades. The company is considering designing the first-stage turbine blades of the GE9X with silicon carbide-based ceramic matrix composites (CMC), which are lighter and more heat-resistant than metal. Indeed, the company tested CMCs in the low-pressure turbine of the F414-GE-400 for a 2011 demonstration.

However, GE decided not to switch to non-metallic materials in the hot section of the F414 EDE.“Part of this programme is really focused on how to introduce this kit without making significant changes to the engine,” Caplan says.
For example, introducing lighter, non-metallic blades encourages an engine designer to reduce the size and weight of the hub, he says – and such changes are complex and expensive.

In the end, the new passive cooling system integrated into the turbine blades was sufficient to meet the requirements of the engine. GE confirms that the F414 EDE turbine is equipped to survive despite a 66˚C (150˚F) increase in turbine inlet temperature.

That increase in temperature margin is the key metric in achieving either increased durability of the overall engine at the baseline thrust level, or the higher-power, less-durable performance at higher thrust setting.

Caplan notes that minor adjustments are made in the combustor and low-pressure turbine, but the significant changes are limited to the fan, compressor and high-pressure turbine. The afterburner module is essentially unchanged.

There has been no shortage of time to study and develop the F414 EDE. The origins of GE’s proposal date back nearly 15 years, when Pratt & Whitney briefly proposed a rival engine upgrade for the F/A-18E/F fleet known as the PW7000.

Over the last 10 years, the navy and GE have invested about $100 million in developing the F414 EDE configuration, Caplan says.Ground testing began in 2004 on a six-stage compressor and turbine. That was followed by a full compressor rig test in 2005. Two years later, GE tested the core with higher airflow from the three-blisk fan module. Finally, in 2011, GE ran more tests on the core.

The challenge now remains for GE to sell the navy on making an investment in the Super Hornet and Growler fleet, despite heavy budgetary pressure.
GE officials have offered to subsidise the cost of development, but Caplan was unwilling to discuss cost estimates or specific cost-sharing proposals.

“I think what’s happened now is there’s more interest – unfortunately, it comes at a time when the budgets are extremely tight,” Caplan says. “There’s more interest as people are starting to look at the longevity of the platform, recognising the fact that the Super Hornet is going to be in service for the next 25-30 years. For the Growler, there’s no publicly announced replacement.”

For GE Aviation, upgrading the F414-GE-400 is more than an opportunity for a near-term contract to upgrade the US Navy’s fleet of Boeing F/A-18E/F Super Hornets and EA-18G Growlers.

The higher-thrust F414 enhanced durability engine (EDE) is also GE’s attempt to remain at the forefront of the market for powering single- and twin-engined, medium-sized fighters.

The F414 has proven remarkably adaptable in the global market. In addition to the F/A-18E/F family, the engine is also offered on the Saab Gripen, Gripen NG and the Hindustan Aeronautics Tejas light combat aircraft.

“There’s a number of different opportunities” for the F414 EDE, Jim Caplan, director of F404/F414 programmes for GE Aviation, says. “There’s applications worldwide that this engine could play a role in.”
Asked about ongoing fighter development programmes in Japan, South Korea and Turkey, Caplan agreed those could be projects of interest to the F414 EDE.

However, the opportunities are not entirely on the foreign market.Caplan notes that the energy produced by the F414 core is limited to 26,400lb-thrust in the EDE configuration only by the size of the air inlet on the Super Hornet.

“If we can get more air in the engine, can we get some more thrust out of it,” Caplan asks. “The answer is yes. We could actually drive this fan to go up a bit in airflow, and if we had some opportunity to redesign the engine bay and physically make the engine bigger, we can drive an even bigger fan and take on more air flow.”