Straight after appearing at this year’s Farnborough air show, the Breitling Super Constellation operated a special flight on behalf of its original manufacturer, Lockheed Martin, for a 45min low-level sortie around the English south coast.

Flightglobal was onboard to sample what airliner flying was like half a century ago, and spoke to one of the senior pilots, Capt Ernst Frei, about handling the big piston-engined aircraft.

“We have a little bit of hydraulic helping us, but it needs a little force to handle it,” says Frei, who is operations director of the “Super Connie’s” Basle-based operator, the Super Constellation Flyers Association. “It’s not flying like a Boeing MD-11 or 747 with just two fingers.”

The 59-year-old L-1049A (HB-RSC) is operated with the support of a number of partners and carries the titles of principal sponsor Breitling. The “Star of Switzerland” is one of just three airworthy Super Constellations, and the only one based in Europe. It is also the only one equipped for passenger flights. 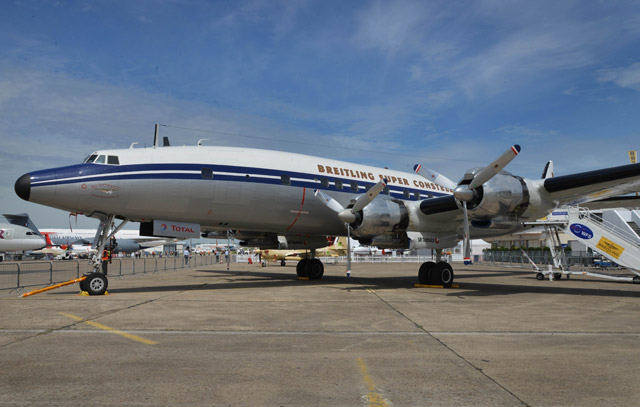 The aircraft was originally delivered as a C-121 to the US Air Force, which operated it for 17 years, primarily in the air ambulance role. It was restored in the 1990s by a group of passionate enthusiasts and made its European comeback in 2004.

“Even people with no idea about aviation know the Constellation with the curved belly and three tails,” says Frei. “And our Constellation is the only one that you can still fly on as a passenger, anywhere in the world.”

Those wishing to experience some 1950s airline nostalgia need to become a supporter member of the Super Constellation Flyers Association. Flight prices are determined by trip distances. Membership costs SwFr120 (€100) per calendar year, or SwFr320 for a three-year subscription. For more information, visit superconstellation.org.