VIDEO: Inside cabin of Delta MD-88 after 2015 runway excursion

The National Transportation Safety Board (NTSB) has released a video showing the scene inside the cabin of a Delta Air Lines Boeing MD-88 during an evacuation at New York's LaGuardia airport in March 2015.

The video, taken by a passenger and obtained by FlightGlobal from the NTSB, depicts a relatively orderly though tense atmosphere.

But it also shows that flight attendants gave conflicting instructions to passengers, and that attendants were unsure whether or when to order the evacuation.

"Are we doing this now?" a flight attendant can be heard asking in the video.

"Everybody stay seated" adds another attendant.

Indeed, the NTSB's 13 September accident report noted that the evacuation did not begin until 12min after the accident, a delay the NTSB attributes to failures by the pilots and cabin crew. The MD-88 (registration N909DL) crashed while attempting to land at LaGuardia during a blizzard on 5 March 2015.

The aircraft touched down on the centreline of snow-covered runway 13, but soon veered left, exited the runway, jumped a berm and came to rest just feet from the shore of Flushing Bay, investigators have said. 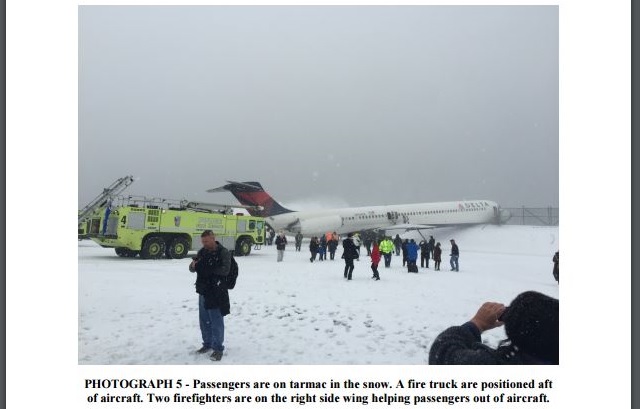 All 127 passengers and five crewmembers evacuated, and 29 passengers suffered minor injuries, the NTSB has said.

The NTSB pinned the accident on pilot error, saying the aircraft drifted sideways because the captain applied excessive reverse thrust, making the rudder ineffective – a known issued with MD-80-family aircraft.

But the board also faulted the pilots and flight attendants for not conducting a prompt evacuation, noting breakdowns in communication, lack of assertiveness and confusion.

The video shows passengers, most still in their seats, awaiting instructions as flight attendants question each other about whether to begin the evacuation.

"We are going to have to evacuate the aircraft," a flight attendant can be heard telling passengers.

"We are waiting for instruction. We have fire crew outside who will help you off the plane," adds another attendant.

"Please do not take any luggage with you. If you have coats, if you have scarves, gloves – that's great."

"When do we anticipate getting luggage," asks a passenger.

"We just have to get off the airplane," replies an attendant.

"Everybody stay seated until we direct you otherwise," says another flight attendant.

The NTSB, in its report, notes that the flight attendants first notified passengers of the need to evacuate about 6min after the aircraft came to a rest, but the evacuation did not begin for another 6min.

And the evacuation only began after urgings from emergency personnel, the NTSB adds.

A total of 17min elapsed until all passengers were off the aircraft, according to the NTSB.

The safety investigatory agency determined the pilots were not adequately assertive in giving instructions and did not tell flight attendants about a fuel leak from the aircraft's left wing.

Also, after the aircraft stopped, several flight attendants left assigned positions (actions that contradicted standard procedures), the NTSB says. As a result, the crew were unable to immediately determine which exits were useable.

The attendants also should not have instructed passengers to gather winter clothing, which delayed the evacuation, the NTSB adds.

"The flight and cabin crews did not conduct a timely or an effective evacuation because of the flight crew’s lack of assertiveness, prompt decision-making and communication, and the flight attendants’ failure to follow standard procedures once the captain commanded the evacuation," the NTSB determined.