Canadian discounter WestJet has unveiled a new livery that largely resembles its current paint scheme but with new curves and an updated take on the Canadian maple leaf symbol.

The company released digitally-rendered images of its new livery on a Boeing 787-9 during a marketing event on 8 May in a hangar at Calgary International airport.

Aircraft painted in the new design will have a nearly all-white fuselage adorned with "WestJet" in capitalised all-blue letters.

That is a change from the current livery, which has "WestJet" painted in two colors – "West" in blue and "Jet in turquoise.

The single colour helps "soften the regional emphasis on 'west'", the company says.

In addition, the fuselage of newly-painted aircraft will read "The Spirit of Canada" on one side, and the French translation "L'esprit du Canada" on the other, WestJet says.

The aft portion of the fuselage and the tail will carry a turquoise, blue, white and grey design that includes curving lines, sharp angles and an image that resembles a maple leaf.

The engine nacelles will also be white with a streak of turquoise across the bottom, marketing materials show.

After first appearing on 737 Max 8s, the new livery will show up on WestJet's incoming 787-9s, which are scheduled to begin arriving in January 2019, the company says.

The company has orders for 10 General Electric GEnx-powered 787-9s, and options for another 10 of the type. 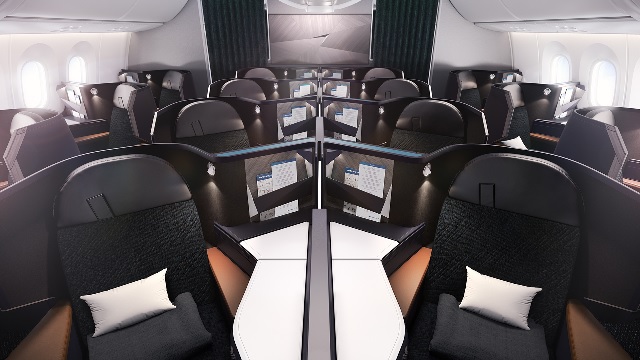 The premium economy section will have a "self-serve social area", according to WestJet.