Belgian carrier VLM is to become the first European Union operator of the Sukhoi Superjet 100 following a deal with Ilyushin Finance to lease two of the regional aircraft.

It has options for a further pair and purchase rights on 10 more. Lease periods on the first two jets, which are subject to a letter of intent, will run for 12 years.

The airline – which is completing a management buy-out from Intro Aviation – will use the Russian-built twinjets to spearhead a return to scheduled services from its Antwerp base starting in April next year.

Since 2009 – when it became part of Air France-KLM’s Dublin-based CityJet business, subsequently acquired by Intro – VLM has operated exclusively charter and wet-lease services for a number of European airlines, including CityJet, using a fleet of 12 Fokker 50s. 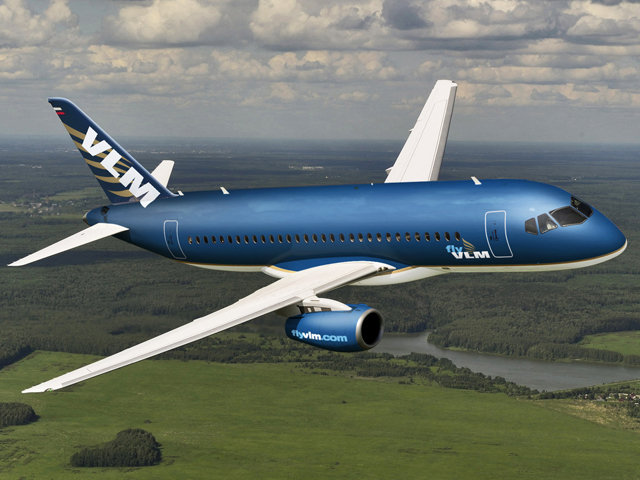 If successful in its applications for traffic rights, it should be flying four Superjets and two Fokker 50s on scheduled routes, he says, adding that VLM hopes announce its new destinations in the coming weeks.

VLM has opted for the long-range version of the Russian-built aircraft, the Superjet 100LR.

White says the airline looked at a “number of types” before committing to the type, including Embraer’s E-Jets and the Boeing 737. “The overwhelming advantage the Superjet has in terms of passenger comfort with its wide cabin was a real driver,” he says. “On top of that, the performance of the long-range model, which suits Antwerp’s short runway, is a game-changer for us.”

Ilyushin Finance chief Alexander Rubtsov says the company is "delighted" about the opportunity to place the aircraft in Europe. "We believe the aircraft will not only enable VLM Airlines to exceed its growth plans but will also give Europe a live insight into the excellent capabilities and passenger appeal of the [Superjet]."

Sukhoi has a total of 166 orders for the Superjet – 50 of which have been delivered, Flightglobal’s Ascend Fleets database shows. However, Mexico’s Interjet is so far the only Western customer, with 11 aircraft and orders for nine more.

Sukhoi Civil Aircraft – in which Italy’s Alenia Aermacchi is a shareholder – splits sales responsibilities with Alenia’s Venice-based Superjet International, which is responsible for marketing the aircraft in the western hemisphere.

The fourth paragraph has been amended for clarity