Canadian low-cost carrier WestJet will call its planned ultra low-cost offshoot Swoop, and it will base the unit in Calgary, WestJet announces on 27 September

The company has also revealed the unit's website address -- www.flyswoop.com -- and details about the logo and paint scheme on Swoop aircraft.

The aircraft will have the name Swoop painted in large magenta letters over a white fuselage, with a magenta and white tail, according to materials supplied by WestJet. 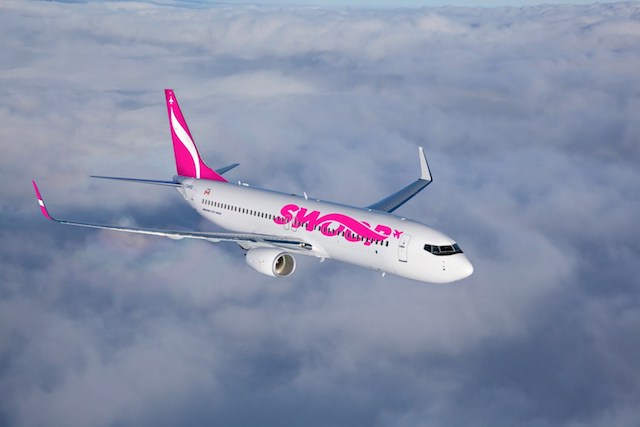 The airline says in a media release that the name Swoop reflects the plan to "swoop in to the Canadian market with a new business model that will provide lower fares and greater opportunity for more Canadians to travel".

WestJet, which is based in Calgary, will also headquarter Swoop in Calgary to enable Swoop to share infrastructure and services with the parent company. Swoop will be able to hire employees that work for WestJet, it says.

WestJet intends to begin selling seats on Swoop in early 2018, and it has targeted a mid-2018 launch, it has said. Swoop will initially operate a fleet of 10 Boeing 737-800s outfitted with 189 seats, it says. Like other ULCCs, Swoop's fares will include only a seat on the aircraft, and it will charge extra for services such as checked or carry-on baggage, it says.

"Times are changing, so we are stepping in to make air travel more affordable," says the promotional video.

WestJet and Air Canada have previously had very little competition.

Then in November 2016 the Canadian government began relaxing a regulation restricting foreign ownership of Canadian airlines to 25%, a move aimed at promoting an ultra low-cost airline industry in Canada.

That move has helped prospective startups, including Canada Jetlines, make progress towards launch. Jetlines say it will begin ULCC flights in mid-2018.