The Royal Air Force is set to commence testing of the defensive aids subsystem for its Airbus A400M tactical transport, following the arrival in the UK of its first modified example. 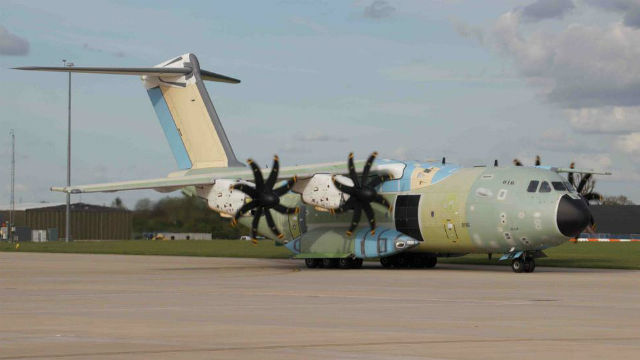 The second of 22 A400Ms to be produced for the UK, aircraft ZM401 touched down at RAF Brize Norton in Oxfordshire on 7 May. Its newly-installed self-protection equipment was installed at Airbus Defence & Space’s Getafe site near Madrid, where it had arrived late last year.

In a Twitter post, Airbus confirms that the unpainted A400M – which still carries its manufacturer number MSN16 and a temporary Spanish registration – has arrived in the UK for tests.

Airbus has so far delivered two of the RAF’s A400M Atlas transports for operational use, as recorded by Flightglobal’s Ascend Fleets database. The company has pledged to increase this total to at least seven aircraft before the end of this year.

The UK in March 2013 placed an £80 million ($124 million) order with Northrop Grumman to provide its large aircraft infrared countermeasures equipment for the Atlas fleet.