Aircraft ZM405 is the fourth aircraft delivered to the RAF and appeared in the show’s static display. Its stop is part of a round-the-world trip, which has seen the "Atlas" visit Tbilisi in Georgia, the United Arab Emirates and Malaysia prior to arriving in South Korea.

Subsequently, it will travel to Japan, Hawaii, California, and Canada before returning to its base at RAF Brize Norton in Oxfordshire. The aircraft is carrying 32 personnel on the trip, including the RAF Falcons parachute display team. 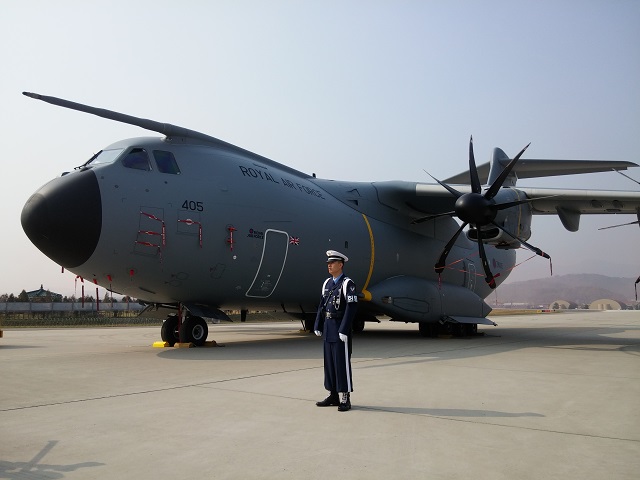 Speaking to Flightglobal aboard the aircraft, Airbus Defence & Space regional director for military aircraft in north and east Asia Pablo Quesada said the European company helped coordinate the visit to coincide with the Seoul show.

Quesada says Airbus sees potential for strategic airlifters in South Korea, although he declines to discuss whether as request for information for such a requirement has been issued.

The A400M’s visit comes after Seoul’s recent selection of the A330 multi-role tanker transport (MRTT) over the Boeing KC-46A Pegasus. The first A330 MRTT will be handed over in 2018, with all four aircraft to be delivered in 2019.