Production cuts for the Boeing 787 programme weighed on the aerostructures business of Mitsubishi Heavy Industries (MHI) during its 2021 financial year. 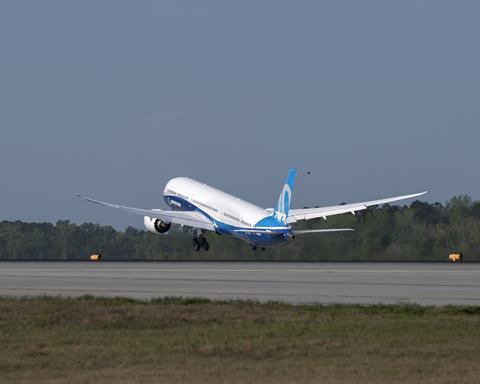 Revenue at its aerostructures business was 70% below FY2019 levels. The company indicates that production cuts for the 787 were a particular challenge.

Order intake for the commercial aviation business was also down in the year, falling 21.4% Y109 billion.

The company delivered 20 shipsets for the 777 programme compared with 24 a year earlier. Shipsets for the developmental 777X fell to four from seven. MHI makes the 777’s aft fuselage panel, tail fuselage, and entry doors.

Deliveries of the 787 were suspended for most of 2021 owing to manufacturing quality issues which have taken longer to rectify than originally planned.

It also indicates that both aero engines and aerostructures were particularly hard bit by the coronavirus pandemic.

Overall, FY2021 revenue at the company’s aircraft, defense and space business was Y605 billion, down 13.8% from a year earlier.

Still, the unit swung to a net profit of Y20 billion from a net loss of Y94.8 billion a year earlier, largely due to the absence of costs related to the defunct SpaceJet regional aircraft programme.