Ampaire has begun ground tests of a Cessna Grand Caravan equipped with the US developer’s hybrid-electric propulsion system.

Dubbed the “Eco Caravan”, the modified aircraft is expected to make its first flight in the second half of 2022. 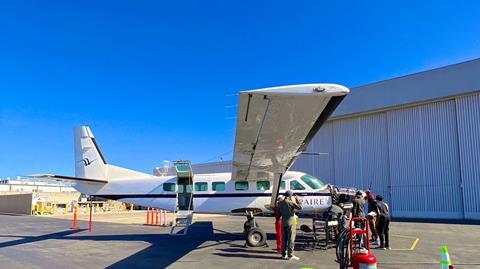 Initial ground power runs at Hawthorne airport in Los Angeles were an “initial validation of the system’s operation”, Ampaire says.

Ampaire intends to validate the hybrid-electric system through a supplemental type certificate. It expects the Eco Caravan to be ready for service entry by 2024.

It claims that fuel savings of between 50-70% will be achievable against the standard turbine-powered Grand Caravan, while still able to carry nine passengers or cargo.

“Powering up a new propulsion system, one that is fully integrated into a flyable aircraft, is a tremendously exciting milestone for Ampaire,” says chief executive and co-founder Kevin Noertker.

“We expect the Eco Caravan to be the first in a series of hybrid-electric upgrades for a number of aircraft models that will transform the industry by lowering emissions and costs.”

The firm has previously flown a pair of modified Cessna 337 Skymasters with one of their two engines replaced with a battery-powered electric motor.