ST Engineering’s commercial aerospace unit is ramping up its passenger-to-freighter conversion capacity, as it discloses that conversion slots for Airbus aircraft have been fully booked through mid-2025.

In a company update for the quarter ended 30 September, ST Engineering says conversion slots for A320 and A321 jets are full until end-2024, while A330P2F conversion slots are booked through mid-2025. 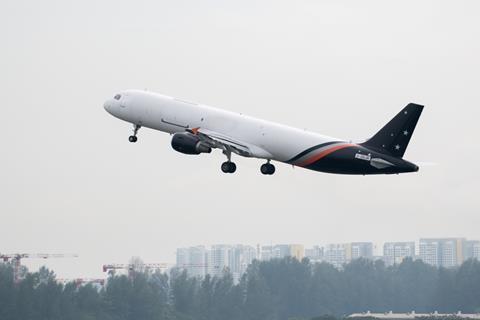 ST Engineering is involved in A321 passenger-to-freighter conversion work.

To meet the “strong demand”, ST Engineering will expand conversion capacity to “more sites”, but did not elaborate further. Current locations for P2F (passenger-to-freighter) conversions include its Singapore base, as well as Guangzhou and Dresden.

For the quarter, the company clinched over S$1 billion ($742 million) in new commercial aviation contracts, taking up the lion’s share of total contract wins.

It clinched an 18-aircraft order from lessor BBAM for A320/A321 converted freighters during the quarter. Other contract wins include multi-year agreements with carriers such as Japan Airlines and Alaska Airlines for component and engine maintenance, respectively.