GMF AeroAsia has received certification to perform MRO services on the Lockheed Martin C-130 tactical transport, as the Indonesian company expands its footprint in the defence sector.

The MRO arm of flag carrier Garuda Indonesia says it received approval for overhaul, refurbishment and modification works for the C-130 Hercules. 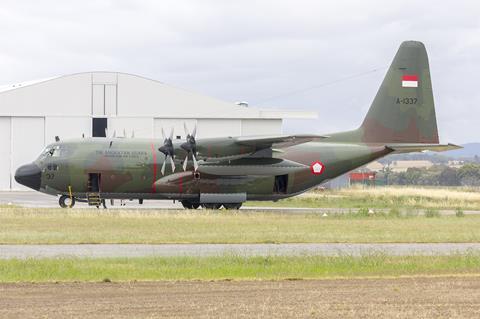 Cirium fleets data indicates there are 26 C-130s in service in Indonesia, all of which are operating for the Indonesian air force.

“With this certificate, Lockheed Martin shows its trust in GMF to maintain every C-130 fleet owned by Indonesia,” says GMF AeroAsia in a 14 March LinkedIn post.

Apart from C-130s, GMF has approval from the Indonesian Defense Airworthiness Authority to maintain Airbus A330s, Boeing 737s, as well as C212 turboprops.

The MRO provider had previously stated its plans to expand its military MRO capabilities, amid a downturn in commercial aviation brought about by the coronavirus pandemic.