A type certificate was officially issued by the Directorate General of Civil Aviation on 18 December, the transport ministry said in a statement on 28 December. 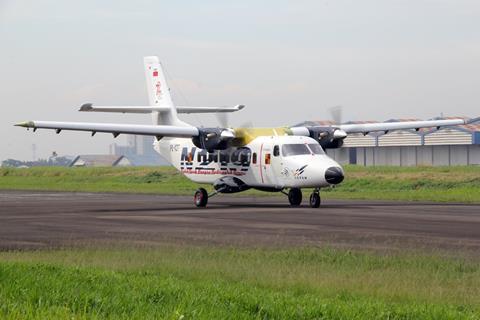 The ministry plans to order the small regional turboprop for flight calibration purposes and for providing air transport services to remote regions, among others.

It states: “The Minister of Transportation hopes that this achievement will motivate Dirgantara Indonesia to continue to innovate, because technical improvements are still needed in the next generation of aircraft so that they can compete with foreign-made aircraft and have high [commercial value].”

According to the ministry, each aircraft is fitted with two Pratt & Whitney Canada’s PT6A engines and can carry up to 19 passengers.

Following the type certification, IAe has plans for the N219 to enter the commercialisation phase in 2021, it states in a 28 December evening update posted on its official Twitter account.

English-language media Jakarta Globe reported on 11 December that the aircraft type completed its final test flight that day. According to the report, Indonesia’s minister for research and technology Bambang Brodjonegoro said the final test flight would clear the way for a commercial aircraft licence for the N219 to fly commercial routes in the country.

The local government of the semi-autonomous Aceh province most recently showed interest in the programme, placing in December 2019 an LOI to order four examples.

Domestic airline Aviastar Mandiri has by far shown the greatest support for the programme, placing in October 2018 an LOI for 20 orders, adding to an April 2015 LOI for 20 orders and 10 options.

Other LOIs – for eight orders by national private charterer Air Born and 10 orders and options for five by for Jakarta-based Trigana Air – also date back to April 2015.

Defunct airlines Merpati and Nusantara Buana Air had lapsed LOIs to order 20 examples each, placed in 2011 and 2012, respectively. Nusantara also had options for another 10.

This story has been updated to include an update from IAe