An impressive performance by its military businesses has helped Leonardo shrug off slow sales of ATR turboprops and Boeing 787 fuselages to notch up robust first-quarter results. 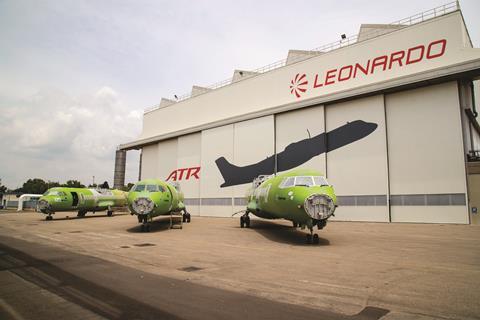 Leonardo co-owns ATR with Airbus, but the sector has been badly hit by the slump in airliner sales and deliveries

The Italian aerospace and defence group recorded revenues up just under 8% at €2.79 billion ($3.36 billion) compared with the corresponding period in 2020. Profits were 132% higher at €95 million.

The results are an illustration of how a strong defence market is helping aerospace manufacturers with a broad portfolio avoid some of the effects of Covid-19 on the airline sector.

Revenues at its European defence electronics business and its US DRS subsidiary – which Leonardo had been attempting to partly spin-off but cancelled an initial public offering in March – grew by around one-tenth. However, the European arm enjoyed an almost 80% order bounce, due in part to a contract for radars for Germany’s Eurofighter combat aircraft, as well as domestic deals in the submarine and cyber security sectors.

The near-collapse in civil aircraft deliveries from the second quarter of 2020 has hit Leonardo’s aerostructures operations heavily – the company co-owns ATR with Airbus, and assembles the fuselages in Italy, as well as being a major supplier to the 787 programme. Just 10 Dreamliner fuselage sections were delivered during the first quarter of 2021, compared with 36 in the same three months last year. ATR added no new orders during the period, against nine in the first quarter of 2020.

Revenues for the aeronautics division – the former Alenia Aeronautics – fell only slightly, with the poor showing for aerostructures compensated by an uptick in deliveries for military programmes, including the Lockheed Martin F-35, for which Leonardo supplies wings. In addition, the division recorded a year-on-year rise in new orders ”thanks to the finalisation of a major contract for the export of M-346 aircraft”. No details of the customer were revealed. Although Greece has previously agreed a deal with Elbit Systems to provide pilot training to the country’s air force, including the acquisition of 10 M-346s, the latest order is in addition to that commitment.

Revenues rose 12.5% for helicopters, although new orders slumped by 42.5% to €855 million, mainly because of the signing of a major support contract for the UK’s Leonardo Helicopters AW101s in quarter one of 2020.

Chief executive Alessandro Profumo says the results are in line with expectations, adding: “Our solid military and governmental business offset the impact of the Covid pandemic on the civil side.”