United Engine (UEC) has displayed at the MAKS air show two new turboshafts that will replace Western-built powerplants on rotorcraft from the Russian Helicopters stable.

Prototypes of both the Klimov VK-650V and larger VK-1600V are at the Zhukovsky event, as the manufacturer pushes ahead with test programmes later this year. 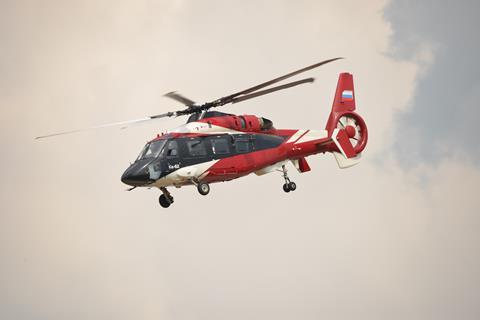 Most advanced of the two is the 650shp (485kW)-rated VK-650V, which has already completed an initial round of ground testing.

Engineering evaluations of the prototype will now get under way, followed by a first check of the engine’s performance characteristics.

Russian Helicopters has confirmed its interest in the engine, says UEC, and is seeking several units to support flight tests as it re-engines several of its models.

The VK-650V will be offered as an alternative to the Safran Arrius 2Gs on the Kamov Ka-226 and for the Kazan Ansat and VR Technologies VRT500, where it will respectively replace the K- and V-model variants of the Pratt & Whitney Canada PW207.

Certification of the new powerplant is scheduled for 2023, having first run in December 2020.

Meanwhile, initial tests will begin later this year of the 1,400shp-class VK-1600V. Certification of the engine is scheduled for 2023, followed by serial production in 2024.

Around 70% of the castings on the VK-1600V have been replaced by 3D-printed parts, says the manufacturer.

It will equip the Ka-62 medium-twin, providing an alternative to the Safran Ardiden 3G.

In addition, UEC has shown a demonstrator of a hybrid-electric engine based on the VK-650V. It includes a gas turbine engine, electric motors, power electronics units, an electric generator and a battery pack.

Potential applications include air vehicles – both rotary- and fixed-wing – with take-off weights between 2-8t.