Comprising 25 firm orders and 25 options, the deal is the third commitment from Monte for green aircraft, having previously struck agreements with Dovetail Aviation and ZeroAvia for hydrogen fuel cell conversions of sub-regional types. 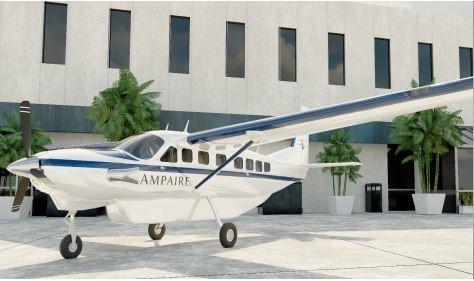 No delivery timeline was disclosed, but Ampaire hopes to obtain Federal Aviation Administration supplemental type certification for the modified Cessna turboprop in 2024.

As a part of the agreement, the pair have also signed up to a “Preferred Partner” relationship, under which Monte will become Ampaire’s preferred financing partner for the Eco Caravan, while Ampaire be the lessor’s supplier of hybrid-electric Caravans. Its deals with Dovetail and ZeroAvia contained similar provisions.

To date, Ampaire has revealed plans for hybridisation of the Caravan and De Havilland Canada DHC-6 Twin Otter. However, it recently indicated that the Beechcraft King Air was also being considered as a potential conversion candidate.

Speaking at the recent NBAA business aviation show, Brice Nzeukou, director of business development at Ampaire, said it had been “assessing multiple aircraft platforms” and had “identified the King Air as having high potential for conversion”.

However, he would not be drawn on whether the King Air would immediately follow after the Eco Caravan. Additionally, Nzeukou declined to reveal Ampaire’s current backlog.