Spirit AeroSystems is the latest large aerospace player to warn that supply chain and staffing challenges are affecting its ability to scale up production and return to profitability. 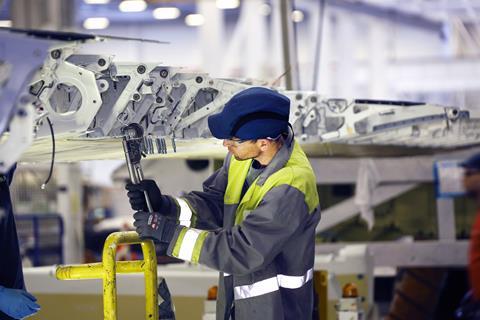 Announcing its second quarter results on 3 August, the Wichita-headquartered aerostructures specialist, a key supplier to the Boeing 737 Max and 787 and Airbus A220 programmes, said it remains confident about the long-term outlook for the industry, especially the narrowbody segment, which represents 85% of its backlog.

Spirit – which increased its Airbus business considerably when it bought Bombardier’s Belfast-based aerostructures division in 2020 – recorded a $122 million net loss for the period, slightly improved year-on-year, on revenues up 26% to $1.3 billion.

The company delivered 318 shipsets during the quarter compared with 235 in the same three months in 2021. These included 71 737s, more than double the amount in the same period last year. However, it shipped far fewer 787s – four, compared with 11 in 2021 – a result of Boeing putting production of the widebody on hold in May 2021.

“Like many other companies, this past quarter we experienced challenges with supply chain, staffing and inflation, as well as schedule changes from our customers, all of which put pressure on profitability,” says chief executive Tom Gentile.

Spirit was also hit by the bankruptcy of a supplier to the A220 programme, which involved costs in relocating the work, as well as Russian sanctions. The company has a modest workshare on the Irkut MC-21.

Gentile says he expects 787 production to remain at 31 shipsets per month through 2023, a figure that is just above break-even for the business on that programme. He expects to add 13 787 shipsets this year to the seven delivered in the first two quarters.

Spirit had a strong quarter for aftermarket sales – these were up 42% year-on-year to $80.4 million. Gentile says the company’s diversification into defence and space was also paying off, with revenues from that segment 3% higher at $146 million, largely due to increased production of the Boeing P-8.

On staffing challenges, he says the company has largely rehired all staff laid off during the pandemic who want to return, and has “started to tap into the market for new employees” with 700 job offers from a jobs fair in Wichita last week. Spirit has other US facilities in Biddeford, Maine; Dallas, Texas; Kinson, North Carolina; Tulsa, Oklahoma. It has UK plants in Belfast and Prestwick, and other sites in France, Malaysia and Morocco.