One of Airbus’s largest two aerostructures providers says protecting its supply chain from the worst of the downturn has been crucial to the survival of many small and medium-sized enterprises.

One of Airbus’s largest two aerostructures providers says sheltering its supply chain from the worst of the downturn has been crucial to the survival of many small and medium-sized enterprises. 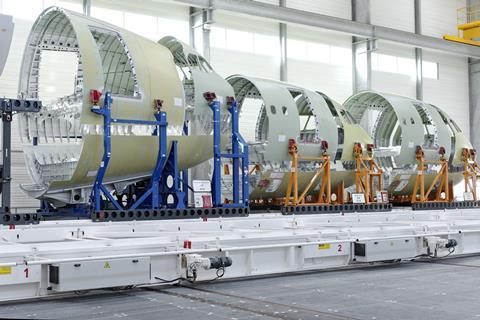 Stelia assembles the forward fuselages for all Airbus types

Toulouse-based Stelia Aerospace is also promising to share with its suppliers the benefits of a planned €110 million ($131 million) four-year investment in advanced manufacturing processes aimed at creating the “industry of the future”, says Stephane Campion, senior vice-president industry at the Airbus-owned tier one supplier.

“For the past year, we have made an effort to take care of our supply chain and manage the reduction of the [aircraft production] rates with them,” Campion said at a virtual presentation on 11 March outlining the company’s “roadmap for future challenges”.

“We make 80% of our turnover through our supply chain, so we did not want a huge breakage,” he says. “We are nothing without our partners, and we will be sharing this investment in the future with them.”

In February, Airbus chief executive Guillaume Faury said proposals to divest Stelia and its German sibling Premium Aerotec were no longer on the cards. Instead, the two businesses would be brought into closer alignment with the parent company.

Campion says the commitment from Airbus makes it easier for Stelia – which has plants in Meaulte, Merignac, Rochefort, St Nazaire and Toulouse, as well as in Morocco and North America – to “prepare for the future”.

Stelia’s aerostructures contracts include the front fuselage for all Airbus aircraft, ATR wings, the access ramp for the Airbus Defence & Space A400M, and the central section of the Bombardier Global 7500. It also specialises in pilot and premium passenger seats.

Among possible projects for this decade and beyond, says Campion, are aircraft structures for a next-generation Airbus type powered by hydrogen.

“Such an aircraft would certainly mean a redesign of the aerostructure’s architecture to integrate the new technology,” he says.