Sweden has pledged to invest at least SKr15 million ($1.4 million) each year into research and innovation activities to support the rapid adoption of electric aircraft in the country.

In addition, the Swedish government has commissioned an analysis on whether it is feasible to mandate the use of electric-powered aircraft on public service obligation (PSO) routes. 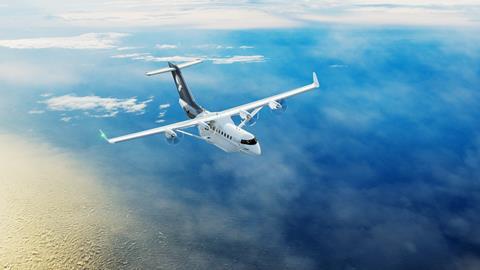 Detailing the initiative, the Ministry of Rural Affairs and Infrastructure says it has commissioned the Trafikverket, or Swedish Transport Administration, “to carry out a new research and innovation investment in the area of electric aviation”, spending “at least” SKr15 million each year in order to ”enable a rapid introduction of electric aviation in Sweden”.

It also calls on the body to “increase cooperation” between those working in the sector.

Trafikverket will also analyse whether current regulations permit the “setting [of] requirements for electric aircraft” during PSO route tenders.

“If the [agency] deems it necessary, the authority must submit proposals for measures that can contribute to an early introduction of electric aircraft on the routes,” the ministry adds.

The analysis should be completed no later than 31 May 2024, it says.

Gothenburg-based Heart Aerospace is developing a hybrid-electric 30-seater, the ES-30, for service entry in 2028. Customers holding letters of intent for the aircraft include Swedish carriers Braathens Regional Airlines and SAS.