Air Macau will for the first time send pilots to the Chinese mainland for training, after inking a training agreement with Civil Aviation Flight University of China (CAFUC).

Under the agreement, Air Macau will send an undisclosed number of trainees to CAFUC, with the aim of “cultivating a new batch of civil aviation talents in Macau”, says the carrier. 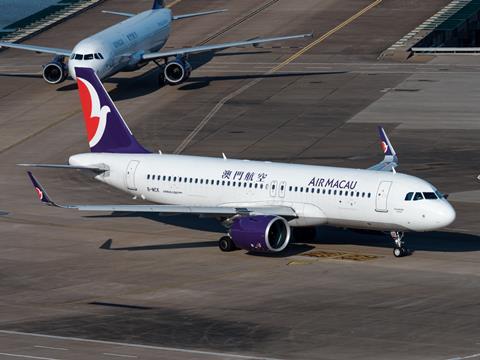 Chengdu-based CAFUC is backed by the Civil Aviation Administration of China (CAAC), and is the Chinese mainland’s only full-time university for cadet pilots and air traffic controllers.

The university also has an aviation engineering institute, as well as airline management school, according to its website.

Air Macau chairman Chen Hong says the partnership a “major move” for the regional carrier, as it looks to tap into — and “actively innovate” — “new channels for training”.

Cirium fleets data shows the airline to operate a fleet of Airbus A320 family aircraft. It has an in-service fleet of three A320ceos, four A320neos, six A321ceos, as well as three A321neos.

The CAAC in a statement announcing the collaboration says the move will “jointly promote” the “booming” Macanese civil aviation industry, as well as help provide a steady pipeline of pilots for the future.