Airbus has delivered the 500th Airbus A320 family aircraft built in its Tianjin plant in China, more than a decade after the Chinese final assembly line began operations.

The aircraft, an A320neo registered B-30FX, went to China Southern Airlines. It is equipped with CFM International Leap-1A engines and is configured to seat 166 passengers. 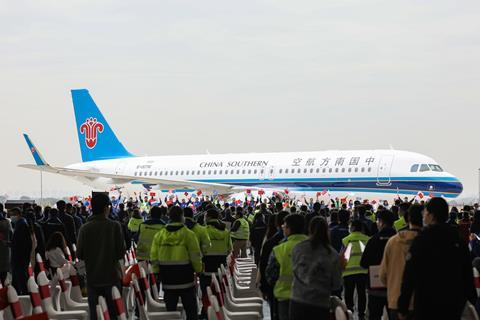 Airbus has delivered the 500th Airbus A320 family aircraft to be built at its Chinese plant.

Cirium fleets data indicates China Southern to have 35 A320neos in its fleet, with two more on order. The carrier has more than 31 A321neos as well, and operates the A320ceo family aircraft, with more than 200 examples of the type in its fleet.

The Tianjin A320 final assembly line began operations in 2008, and is the first Airbus production line outside Europe. Tianjin is also home to an A330 completion and delivery centre, which opened in 2017.

Says Airbus China chief George Xu: “The delivery of the 500th A320 Family aircraft assembled in Tianjin is an important achievement of Airbus in China. It is a testimony of the excellent industrial cooperation between the Chinese aviation industry and Airbus, underlining all partners’ long-term commitment to the buoyant China market.”