The aviation sector is calling for close collaboration in development of so-called “vaccine passports”, hoping such documents could promote re-opening of international travel following the yearlong coronavirus crisis.

However, some industry participants insist such documents – which would prove a person has been immunised – should not be required to travel internationally.

During an aviation forum sponsored by the US Chamber of Commerce on 31 March, executives say governments, airlines and others must work jointly to make such documents effective and accepted globally, while still protecting holders’ privacy.

“Coming to grips with what that standard looks like and getting enough… countries to sign up – that’s the challenge,” says Boeing chief executive David Calhoun. “Do we need something? I think we absolutely do. I’m hopeful that coordination will begin in the next couple of months.” 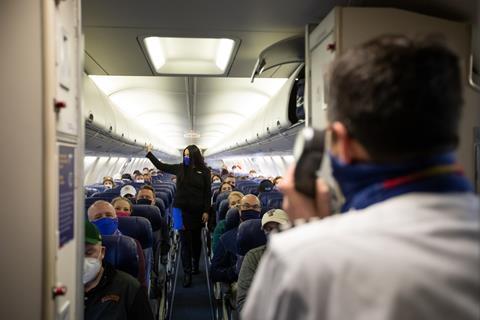 Vaccine passports have become a hot topic as more potential travellers are immunised against the coronavirus. The documents – also known as digital health passports – have been floated as a means by which governments can open international travel to more people.

Airline alliance Oneworld president Rob Gurney says such documents will be “crucial” to a meaningful travel travel rebound, adding that  “governments will set policy and airlines will comply”.

“Health credentialing platforms are going to be a key enabler to restarting travel,” adds Gurney, who spoke at a different event on 31 March.

Others are unconvinced. Privacy issues are among the biggest concerns.

Sarah Nelson, president of flight attendant union Association of Flight Attendants-CWA, insists vaccine passports “must be voluntary and not mandatory”.

Passengers could “choose [to use such a passport] to speed up the boarding process, adding a level of comfort of screening and minimising risk”, she says during the Chamber event.

“I don’t see there would be any reason for travel restrictions,” O’Leary said.

If governments do pursue health passports, they face a hugely complex project.

Governments and airlines are trialling various mobile phone applications that could support a health passport programme.

Panama, the Latin American nation of 4.25 million people whose flag Copa carries, is the only country to explicitly support the effort, though IATA expresses confidence that support will build as governments understand benefits.