China Eastern Airlines has taken delivery of its first Comac C919 narrowbody, as it targets operating them on commercial flights in early 2023.

The aircraft, registered B-919A (MSN107), took off on its delivery flight from Shanghai’s Pudong airport to Hongqiao airport, which is also in the eastern Chinese city. 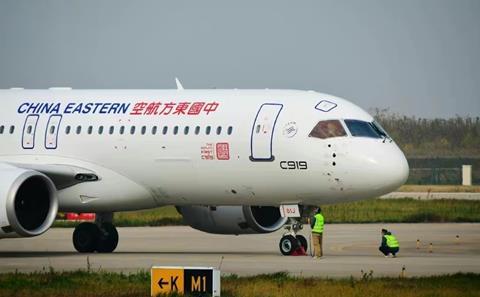 Shanghai-headquartered China Eastern has five examples on order and is the type’s launch customer.

The airline says its C919s are configured to seat 164 passengers in two classes, a marked shift from earlier plans to let its low-cost unit OTT Airlines operate the type.

The latest development comes less than two weeks after the C919 programme – touted as China’s answer to the Airbus A320 and Boeing 737 family aircraft – was awarded its production certificate, paving the way for mass production of the type.

In late-September, the Civil Aviation Administration of China certificated the C919, a move the Shanghai-based airframer hails as a significant milestone for the country’s aerospace sector.

In May this year, the first aircraft bound for China Eastern carried out its first test flight, performing a 3h sortie from Shanghai.

While a Chinese aircraft programme, the C919 relies heavily on Western technology, including for its engines – CFM International Leap-1Cs – as well as cockpit control and interior systems from Collins Aerospace.