Some 980 staff, including 800 De Havilland workers and 180 Viking employees, “will be affected” by the move, says Longview.

Those staffers represent 65% of De Havilland’s workforce and 40% of Viking’s, according to Longview, which did not immediately respond to requests for more information. 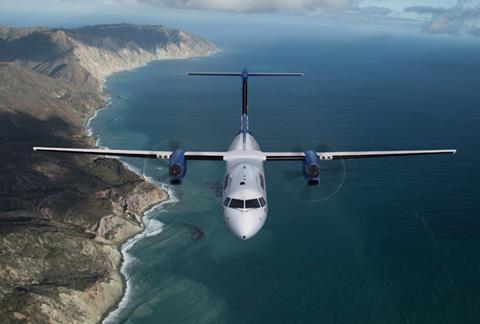 A Q400 in Bombardier’s colours. Longview bought the programme from Bombardier in 2019.

“Longview hopes to restart aircraft manufacturing operations as conditions improve – based upon ongoing local, national and international events and developments,” the company says.

“The global aviation industry is facing unprecedented uncertainty as a result of the novel coronavirus,” it adds. “On the basis of these discussions, and against the backdrop of significantly reduced airline activity, Longview determined that it is necessary to pause all new aircraft production activity at this time.”

The company had envisioned developing upgraded and special-mission variants of the turboprop.

Flybe, which had operated 50 Q400s, was one of the first European airline casualties of the coronavirus.