Taiwan has joined a growing list of governments around the world to close off its borders to foreign arrivals, in a bid to stem the tide of imported coronavirus cases.

A notice from the ministry of foreign affairs states the travel ban kicks in on 19 March, though exceptions will be made foreign residents of Taiwan, as well as those on diplomatic or official business.

However, those exempted from the travel ban must observe a 14-day self-quarantine arrangement upon arrival.

The announcement comes as Taiwan sees an uptick in imported cases, despite a slower rate of local transmission. On 17 March, it saw 10 new cases, all of which were by persons returning from overseas travel.

The restriction on foreign arrivals will have some impact on Taiwan’s carriers. Cirium’s schedules data for March indicates Japan taking about a quarter of international seat capacity from Taiwan, followed by South Korea and Vietnam. 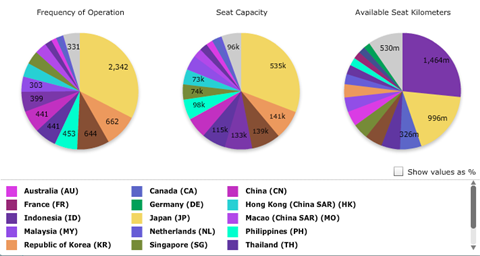 Capacity out of Taiwan in March 2020

By ASKs, the United States takes the largest share, followed by Japan.

Capacity out of Taiwan in March 2020 (by airline)

Taiwan’s travel restrictions follows a move to extend a financial lifeline to its carriers, by way of subsidies and loans, to help stave off the impact of the outbreak.