Airbus Defence & Space has begun offering its C295W transport with an in-flight refuelling system modification, after completing a fresh series of trials with a medium rotorcraft.

Conducted during December in conjunction with Airbus Helicopters, the trials involved a pair of C295s supporting H225M Caracals. This involved the use of a palletised hose-and-drogue refuelling system, deployed via the medium transport’s rear ramp. 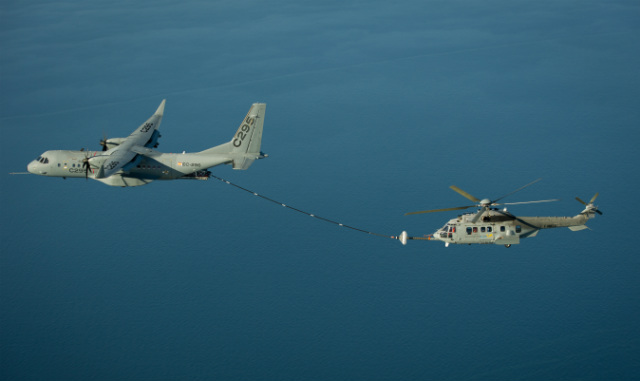 “Contacts were executed at speeds of 105-115kt [194-212km/h], and both crews reported smooth and simple operation,” the airframer says. It had also last September performed a series of refuelling system contacts between a pair of C295s.

“The system is now being offered to existing and prospective C295 operators,” Airbus says. “Possible applications include special forces applications and extending the range of search and rescue aircraft.”

Flight Fleets Analyzer records the C295 and winglet-equipped W-model as being in service with 23 nations, with the total operational fleet standing at 152 units.