Airbus and Boeing are still sitting on large fleets of produced but undelivered commercial jets, reflecting the continued slow pace of aircraft hand-offs amid what could be called the aerospace industry’s most-severe downturn.

On 1 October, the companies held 622 jets that have completed first-flight but have not been delivered, according to Cirium fleets data.

The figure is down slightly from July, when a FlightGlobal analysis tallied 628 undelivered Airbus and Boeing jets. 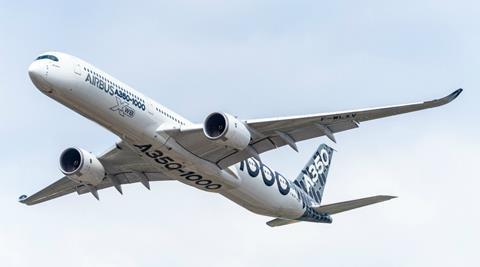 Boeing’s 423-strong fleet of stockpiled 737 Max significantly inflate the tally. Boeing stockpiled 737 Max in 2019 when it continued producing the jets amid the regulatory grounding, which prohibited Boeing from delivering the aircraft.

Excluding the Max, the airframers hold 199 produced-but-not-delivered commercial aircraft – a six fewer than at the end of July.

Boeing’s undelivered fleet on 1 October stood at 478 aircraft, up from 462 in July.

The jump largely reflects more undelivered 787s. Boeing held 44 of those jets on 1 October, up from 31 several months ago.

But the coronavirus-driven industry downturn has soured demand for new jets. Additionally, manufacturers have said travel restrictions have hindered their ability to hand off new aircraft.

In August, Airbus delivered 39 jets and Boeing handed over 13, according to the manufacturers’ most-recent figures.