Orlando-based Mammoth, one of several 777 cargo-conversion shops, disclosed the deal on 13 October, saying conversion work on AviaAM’s first jet will start in early 2023. 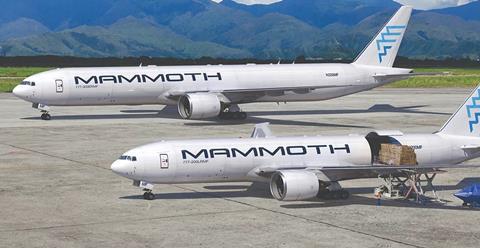 “We will meet the demand for widebody converted freighters, to replace ageing ones and accommodate future growth across our group airlines’ fleet,” adds AviaAM CEO Tadas Goberis.

Mammoth’s partner, Texas-based Aspire MRO, will perform the conversion work at its Alliance airport site in Fort Worth.

“Having completed multiple 737-800 passenger-to-freighter aircraft conversions this year, AviaAM is making major investments in multiple freighter types as it continues with its expansion plans in the air-cargo market,” the companies say.

Mammoth now holds orders from multiple customers for cargo conversions of 29 777s and is working to close orders for another 12 777-300ER conversions – discussions in “advanced stages of commitment”, the companies add.

The US modification shop came onto the cargo-market scene several years ago when it revealed its 777-200LR and 777-300ER cargo-conversion programmes.

Mammoth intends in 2023 to achieve a supplemental type certificate from the Federal Aviation Administration for its 777-200LR conversion.