Boeing has made several senior staff changes in its commercial aircraft division as part of an effort to help the company address nagging supply chain troubles.

“I’m announcing leadership changes to further enable increasing stability and predictability in our supply chain and factories, along with the continued development of our senior leaders,” Boeing Commercial Airplanes chief executive Stan Deal says in a 20 December email obtained by FlightGlobal.

The changes will become effective “over the next few weeks”, adds the message, which Deal sent to Boeing employees. 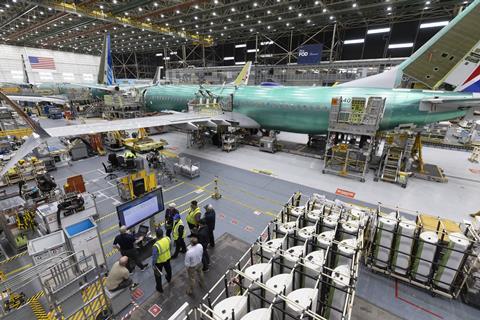 “Both our internal and external supply chains are being combined under Ihssane to integrate our supply chain strategies, deliverables and requirements across all commercial airplane programmes,” Deal says.

Additionally, Boeing has named Peter Johnson as its new vice-president and general manager of fabrication. Johnson is currently vice-president of operations, according to his LinkedIn profile.

The moves come as Boeing works to pull itself from a supply chain rut that has seen the company short of critical components needed to build jets. Those components have included avionics, cockpit windows, cabin interiors, wiring connectors and CFM International Leap-1B engines for 737 Max, executives have said.

The parts shortages and other issues, including shortages of skilled workers, have left Boeing struggling particularly to ramp production of 737s. That programme has been lumbering along at reduced rates.

Boeing named vice-president and general manager of its 747 and 767 programmes Kim Smith as new vice-president of total quality for the company’s Boeing Global Services division.

“She will be responsible for transforming the quality function by deploying common processes, tools and training throughout the value chain,” Deal says of Smith, who will report to Global Services chief executive Stephanie Pope.