The move is an effort by AutoFlight to establish a foothold in the important US market.

Bar-Yohay left Eviation in February after steering it through development of its electric Alice aircraft, which achieved first flight on 27 September. He became Shanghai-based AutoFlight’s president at the beginning of the month, the company said on 5 October. 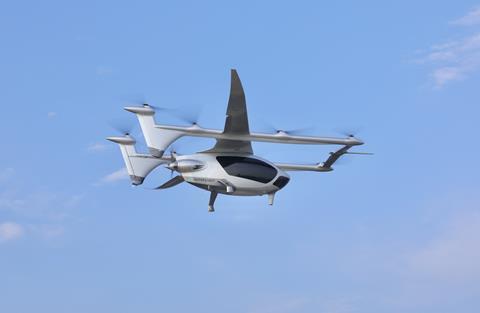 “The American market is the biggest and most significant for this to kick off,” Bar-Yohay says. “The beautiful thing about AutoFlight is that [they] are the market leader no one has heard about.”

He says AutoFlight has made significant progress developing its electric vertical take-off and landing (eVTOL) aircraft – but largely out of the public eye. “When I dug in deeper, I was very surprised,” he adds.

AutoFlight’s test aircraft have completed “over 100 full-transition flights” – the crucial manouevre changing from vertical to forward flight, the firm says.

It is developing an air taxi that will carry four people – one pilot and three passengers – on flights up to about 108nm (200km).

It will “be operated like a helicopter is operated today… but at a much lower cost”, Bar-Yohay says.

AutoFlight chose a hangar at California’s Napa County airport for its new US base. The firm aims to begin flying its “Prosperity I” demonstrator early next year in the USA, with certification pegged for late 2025 and service entry in 2026, Bar-Yohay says.

It is designing an aircraft to Western standards and intends to certificate its aircraft in Europe and the USA.

Competitors, he says, face the incredibly difficult task of creating such infrastructure from scratch.

It plans to complete most eVTOL design work in house, including electrical-system integration. Western companies will supply systems like flight controls and avionics, Bar-Yohay says.

“We are… trying to play to the strengths of each [part] of the company,” Bar Yohay says.

He calls the eVTOL design “very, very simple to build” and says they will sell for about $1 million each. It is “one of the only specimens out there… that could hit a price point that makes any economic sense”.

But Bar-Yohay declines to disclose AutoFlight’s finances, simply saying it “is well funded to get where it should go”. In 2021, the company said it had landed a $100 million investment from Germany’s Team Global Management.

Bar-Yohay takes up the new role after co-founding Eviation and leading it through development of its Alice prototype. He left in February, saying he and Eviation’s majority owner Clermont Group had different views on how to proceed.

Bar-Yohay initially remained involved as an Eviation board member but has since stepped down from that post to focus on AutoFlight. He retains an ownership stake in Eviation, however.