The “Dash 8 P-4” would be a maritime patrol aircraft (MPA) and have capability to perform intelligence surveillance and reconnaissance (ISR) tasks, the companies said on 25 February.

Malaysia has for some years been seeking a new MPA capability.

A digital rendering of the P-4, released by De Havilland, suggests the aircraft would have an electro-optical/infrared sensor turret under its nose, a maritime search radar housed in a faring under the fuselage aft of the wing, and an aft magnetic-anomaly detector boom for submarine hunting. 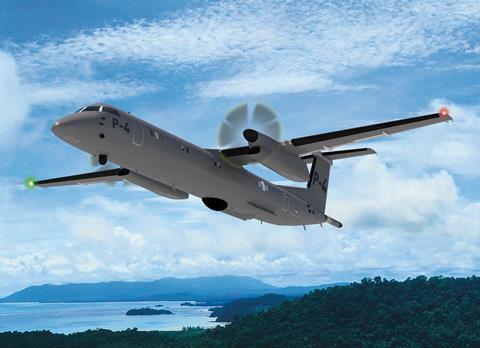 “We… believe strongly that the Dash 8 P‐4 will prove to be a market leading MPA and ISR solution while supporting highly skilled employment and the development of critical intellectual property here in Canada,” adds Curtis.

The P-4 could have auxiliary fuel tanks, giving it “superior range, endurance and time on station”, the companies say, adding that the aircraft could have a mission time exceeding 8h.

“PAL Aerospace and De Havilland Canada believe there exists a significant global market for missionised turboprop aircraft, especially in the MPA and ISR market,” they add.

The companies have released few details about the P-4’s likely capabilities or their development timeline, and did not immediately respond to a request for more information. 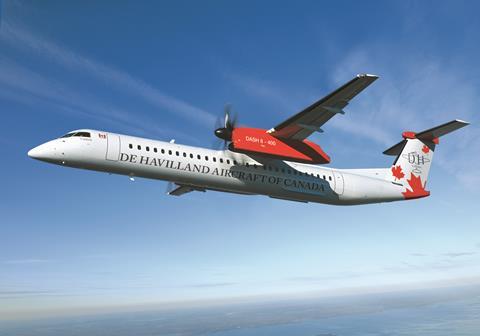 News of the possible development of the P-4 came one week after Toronto-based De Havilland said it will temporarily “pause” Dash 8-400 production due to the Covid-19 pandemic. De Havilland will move out of its leased manufacturing site in the Downsview section of Toronto and seek a new facility, it says.

Longview acquired the Dash 8 programme from Bombardier in May 2019. At that time, De Havilland chief operating officer Todd Young told FlightGlobal he envisioned special-mission variants of the Dash 8-400.

Story updated on 25 February to include details about the P-4’s mission time.