De Havilland Canada confirms it is considering ”pausing” production of its Dash 8-400 turboprop amid the pandemic.

The Toronto, Canada-headquartered company tells FlightGlobal on 28 January it is committed to sell and deliver the type, and to support the existing global fleet, “while taking appropriate measures to safeguard our people and our business”. 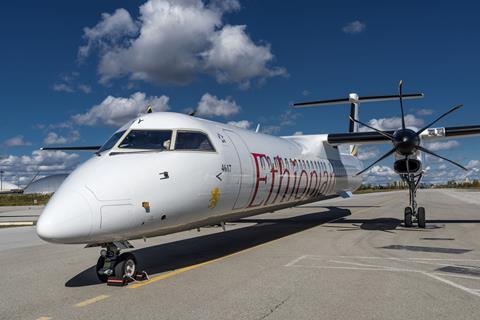 “While the very challenging market conditions being faced by the industry may lead to a pause in production this year, De Havilland Canada has not determined the duration of such a pause if one were to occur,” the company says.

“We have no intention of sunsetting the Dash 8 programme at this time, and both support and production of aircraft are part of our future plans,” the firm adds.

“We are fully committed to delivering the aircraft that have been ordered by our customers, so a pause would only occur after aircraft in our backlog are manufactured,” the airframer says.

The company adds that its plant at the Toronto Downsview site has capability to produce aircraft “into 2023”. De Havilland has previously said it can extend its lease on the Downsview site until that year.

De Havilland says it delivered 11 aircraft during 2020, including two to Ethiopian.

Story clarified on 17 February 2021 to note that De Havilland has said it can remain at Downsview until 2023 under lease extensions.