The European Union Aviation Safety Agency (EASA) has completed its test flights of the Boeing 737 Max aircraft ahead of its possible recertification and return to service later this year.

The test flights took place over the course of three days this week in Vancouver, Canada, due to coronavirus-related travel restrictions, the European regulatory agency says on 11 September. EASA did not say how many flights took place during that time, or what scenarios were tested. 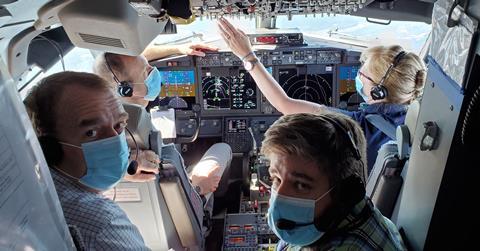 “EASA has been working steadily, in close cooperation with the FAA and Boeing, to return the Boeing 737 Max aircraft to service as soon as possible, but only once we are convinced it is safe,” EASA says.

The Federal Aviation Administration completed its own flight tests of the type on 1 July, but there is still no indication of when the jet will be released to fly again in revenue service. The aircraft’s recertification flights were an important milestone in the process to bring the troubled aircraft back, but numerous steps are still required.

EASA says it is now analysing the data collected during the flights ahead of the Joint Operations Evaluation Board (JOEB), scheduled to begin in London next week. The JOEB is composed of pilots from US and international 737 Max operators and is tasked with evaluating 737 Max pilot training. It will send information and data to the FAA’s Flight Standardisation Board, which will make the FAA’s final training recommendations.

The 737 Max was grounded worldwide in March 2019 after two separate accidents killed 346 passengers and crew. The aircraft’s new Maneuvering Characteristics Augmentation System (MCAS) was at fault in both crashes.

In August, the FAA suggested four key design changes to the beleaguered aircraft in order to address the safety issues that led to the crashes. The proposed Airworthiness Directive (AD) includes proposals that will enhance the safety of the aircraft as well as the ability of the cockpit crew to deal with potential issues. The public comment period for the proposed AD ends later this month.

Boeing also said in August that it intends to deliver a majority of its 450-strong 737 Max stockpile within one year of resuming deliveries of the still-grounded jet. Boeing accumulated those aircraft because it continued manufacturing the Max through most of 2019 despite being unable to deliver the jets due to the worldwide grounding.