Embraer commercial ‘no longer for sale’

After a planned merger of Embraer’s commercial aircraft division with Boeing collapsed earlier this year, the Brazilian airframer is prepared to remain independent – but is hunting for partnerships.

“Commercial aviation is no longer for sale,” says chief executive Arjan Meijer on 2 December, as the company presented its market forecast for the next ten years.

“We took it out of the shop window. It has been fully integrated back into Embraer,” he adds. 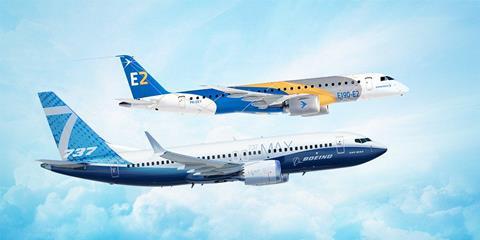 Embraer “no longer for sale” after collapse of Boeing deal

In April, the US airframer called off a deal with Embraer’s commercial aviation division at the eleventh hour. Boeing was to pay $4.2 billion for an 80% share of Embraer’s commercial division, and the Brazilian company had invested more than $120 million to carve out that business before the agreement collapsed.

Shortly after, John Slattery, the Embraer executive who had been tapped to take over the top spot at the joint venture, left the company and was replaced by Meijer, previously the commercial aircraft division’s chief commercial officer.

Meijer says the company has shifted its strategy and in the next five years is looking for partnerships.

“We have completely restructured the company over the last five months, redefined our strategy, brought everything back together,” he says. “We have made some very strong steps already, so now we’re looking to finish this.”

During the presentation, Meijer also reiterated that the company remains committed to its third and smallest E2 jet family member, the E175-E2, which had its first flight last December. Embraer had said in August that it was pushing back the jet’s entry into service until 2023 due to market conditions.

“The E175-E2 is [coming] a bit later than anticipated – expect it by the second half of 2023,” Meijer says. “We have a prototype flying around and are fully committed to the aircraft.”

He adds that the company sees the E175-E2 as “an integral part of the family” and that there is a “good market” for the smaller aircraft segment.