Embraer in the second quarter swung to its first quarterly profit in two years, earning $87.9 million in a period marked by a surge in revenue and bump in aircraft deliveries.

The improved financial results also came in a quarter during which Embraer landed orders for dozens of commercial jets, pumping up the value of its backlog by more than $1 billion.

The broader aerospace industry benefitted in the second quarter from returning demand for air travel, with airlines in many regions, notably the USA, reporting improved air travel demand. 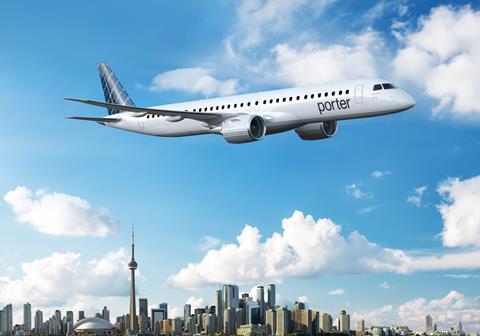 Rendering of an E195-E2 in Porter Airlines’ colours

The company had not turned a quarterly profit since the second quarter of 2019.

Embraer generated $1.1 billion in revenue during the second quarter of 2021, more than double its revenue in the same period last year.

The 34 deliveries in the most-recent period included 14 commercial jets – it delivered just four in the same period of 2020 – and 20 executive jets, up from 13 in the comparable 2020 period.

Embraer expects full-year 2021 revenue will be $4-4.5 billion. That would an increase of between 6-19% year on year but still significantly less than Embraer’s $5.5 million revenue in 2019.

Embraer ended June with a backlog valued at $15.9 million, up from $14.2 billion three months earlier.

During the second quarter, the company landed orders for 30 E195-E2s from Canada’s Porter Airlines, with deliveries beginning in 2022, and for 34 E175s, among them nine jets for operation by US carrier Horizon Air and 25 for operation by SkyWest Airlines.