Embraer looks to double its revenue in ‘medium term’

Embraer thinks its can possibly double its revenue in the “medium term”, the result of increasing aircraft delivery rates and expanding its aircraft services business.

“With all this combination we believe we have potential to almost double the revenue in the medium term. It’s feasible,” Embraer chief executive Francisco Gomes Neto says on 13 August.

Neto does not define “medium term” nor specify what baseline from which the doubling would be measured. 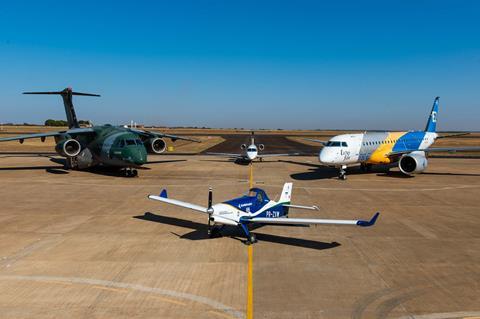 But in pandemic-hammered 2020, Embraer generated $3.8 billion in revenue, down 31% year-on-year. Last year, it delivered 44 commercial aircraft and 86 executive jets.

Neto says Embraer is on path to returning to 2019 levels. That year, the company logged $5.5 billion in revenue and delivered 89 commercial jets and 109 executive jets.

Embraer is working on new aircraft programmes including an electric aircraft for the Brazilian air force and a commercial passenger turboprop.

Key to Embraer’s growth plan is expansion of its services business, driven largely by expansion of the company’s Portuguese maintenance facility OGMA.

Embraer expects revenue from that business, of which it owns a majority, will eventually triple thanks to a new service deal with Pratt & Whitney. The site, which became an authorised maintainer of P&W geared turbofans last year, could eventually bring in €600 million ($708 million) annually, the company has said.