ATR has handed over the first of 30 factory-built ATR 72-600 Freighters to launch customer FedEx Express, with the twin-turboprop to make its commercial debut on European routes in the coming weeks.

FedEx will receive a further six or seven examples in 2021 and the remainder will follow in the period to 2025 at a maximum rate of six aircraft per year, says Scot Struminger, executive vice-president and chief executive of aviation at the express carrier. 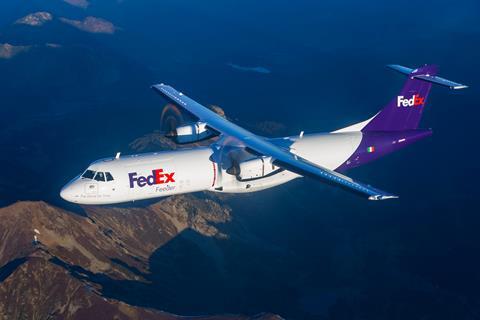 Initial example will be operated by Ireland’s ASL Airlines

Speaking during an online delivery event today, Struminger said the first aircraft (EI-GUL) will be flown to Shannon airport for “customisation” – including the addition of an enhanced vision system – before it enters service with Irish operator ASL Airlines.

Initial commercial flights will see it operate between Paris Charles de Gaulle and the Czech Republic, he says. The second ATR 72-600F will be the first to fly in the USA, while the next three units will be based in Latin America.

These include the removal of windows from the fuselage to reduce weight, drag and the potential for corrosion. A large front cargo door has been added, with a reinforced surround, allowing the loading of LD3 containers. Nets are also provided for the carriage of bulk cargo and the floor is reinforced.

In addition, interior lighting was improved to permit round-the-clock loading or unloading, and the aircraft’s batteries uprated to allow extended ground operations – and even running the de-icing system – without the need to start the engines or be attached to a ground power unit.

Struminger says the ability to load the aircraft with bulk freight, LD3 containers or pallets gives the feeder operation enormous flexibility, not least that it can now offer a pallet service to destinations with insufficient volume “to be supported by a [Boeing] 757”. 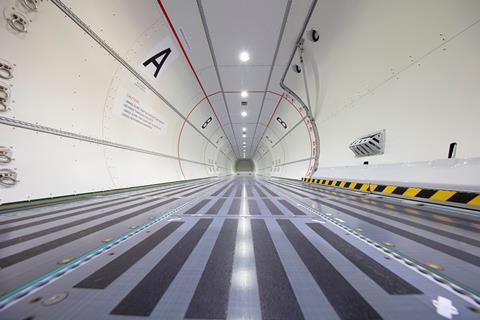 Stefano Bortoli, ATR chief executive, says the airframer has seen a “surge of interest” in the ATR 72-600F and discussions with potential customers are ongoing.

“I am confident that by the end of 2021 we will secure one additional customer for this product,” he says. FedEx has placed the sole order to date, for 30 firm aircraft plus 20 options.

Bortoli says the ATR 72-600F is the latest cargo solution for the twin-turboprop, with the permanent and temporary conversion of passenger aircraft also options. In the latter case, 11 existing ATR 72 operators have opted for the short-term modification.

ATR forecasts a total market for 460 turboprop freighters over the next 20 years, either conversions or new-build examples.

In November, Leonardo, a joint shareholder in the business alongside Airbus, revealed that just one ATR aircraft had been delivered in the first nine months of 2020.

However, Bortoli declines to speculate on the number of shipments it will make in the final quarter.