Hindustan Aeronautics (HAL) has entered the commercial air traffic with a deal that will see Alliance Air lease a pair of Do-228s for use on regional routes.

The carrier will use the aircraft to operate regional routes in India’s Arunachal Pradesh state, says HAL. 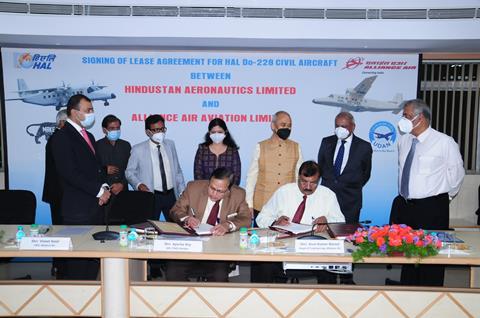 HAL says type is well suited to operating rough terrain, with its short take-off and landing capability, as well as the ability to operate from “semi-prepared” runways.

“The company is keen to increase its footprint in the regional civil aviation by engaging more numbers of HAL Do-228 by air operators of the country,” says HAL.

Representatives from Alliance and HAL signed the agreement in Bengaluru. No details about the lease terms or delivery timeframe were provided.

To assist New Delhi’s Regional Connectivity Scheme, HAL aims to secure both domestic type certification for the 19-seater Do-228 from India’s Directorate General of Civil Aviation, as well as international type certification.

The civilian version of the Do-228 is based on the Do-228-201, which HAL produces for the Indian military.

In August, HAL said the civilian Do-228 was conducting ground runs and low-speed taxi tests.