Kalitta to be launch operator of 777-300ERSF converted freighter

Kalitta Air will be the first airline to operate the Boeing 777-300ERSF, a converted freighter being developed by lessor GECAS and Israel Aerospace Industries (IAI).

GECAS reached an agreement under which Michigan-based Kalitta will operate three of the freighters, with deliveries in 2023, the lessor says on 27 October.

Conversion specialist IAI and GECAS launched the 777-300ER conversion programme in October 2019. IAI has been working to secure a supplemental type certificate for the 777-300ERSF variant. 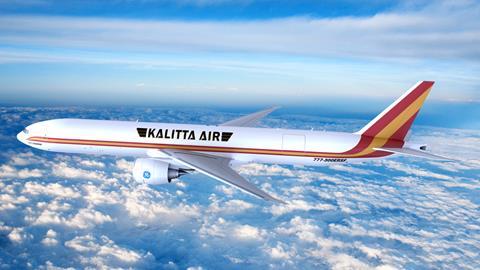 A rendition of a Boeing 777-300ERSF in Kalitta Air’s colours.

Previously, the developers predicted the type would enter service in 2022, though GECAS now says the Kalitta deliveries will come in 2023.