Leonardo in talks for aerostructures role on CR929 widebody

Leonardo is lining up a role as an aerostructures supplier for the CR929 widebody programme being developed by Russia and China under the CRAIC joint venture.

Speaking during a full-year results presentation on 10 March, Leonardo general manager Lucio Valerio Cioffi said that the company was working to diversify its aerostructures business.

This includes supplying “new-generation programmes – an example being participation in the new CR929”. 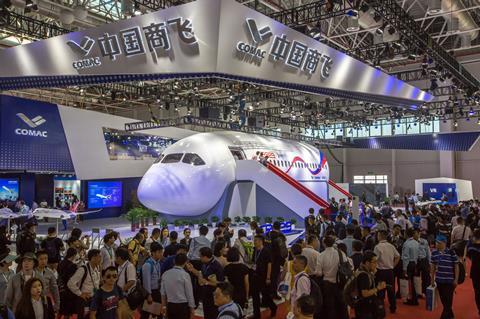 Asked for clarification regarding its degree of involvement in the Sino-Russian widebody, the Italian company adds: “Talks are ongoing in order to define Leonardo’s participation as a prime supplier in the programme for development, manufacturing, and assembly of aerostructures for the CR929.”

CRAIC – a joint venture between China’s Comac and Russian airframer United Aircraft – intends the CR929 to carry almost 300 passengers in a three-class layout on routes of around 6,500nm (12,000km).

Manufacturing of parts for the first prototype is due to begin this year, ahead of a first flight planned for 2023. Service entry is pegged for the latter half of this decade.

However, the partners have yet to announce the selection of an engine supplier for the widebody.

Leonardo had previously held a stake in Sukhoi Civil Aircraft, part of United Aircraft, relating to involvement in the Superjet 100 regional jet programme, but sold its remaining shares in 2016.