The Sidney, British Columbia company had previously intended to launch the programme in 2020. Earlier this year, it pushed back the launch to the fourth quarter.

“Unfortunately, due to the effect of Covid-19 on Viking’s operations and the pandemic’s impact on governments, their citizens and budgets globally, we have elected to slide the formal launch of the CL-515 until we see a stabilisation in the global economic situation and a return to normal daily activities,” Viking executive vice-president of sales and marketing Robert Mauracher tells FlightGlobal.

Viking does not elaborate on when the formal launch of the aircraft might happen. 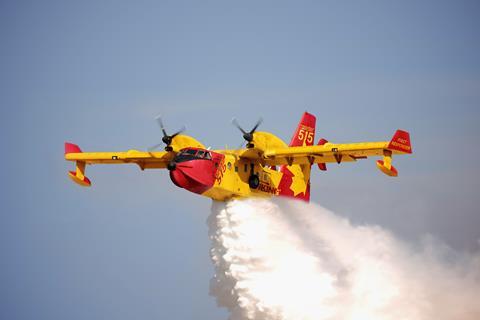 The CL-515 is to be a new-build variant of Viking’s stalwart CL line of water bombers and special mission aircraft. Previous versions include the original CL-215, the CL-415 and the CL-415EAF, which are upgraded CL-415s.

Powered by Pratt & Whitney Canada PW123AF turboprops, the CL-515 is to have Collins Aerospace’s Pro Line Fusion digital cockpit, and more capability than previous variants. It will have better corrosion protection, increased landing weight and 7,000 litres (1,850USgal) of water capacity, up from the CL-415’s 6,000-litre capacity, Mauracher said in 2018.

Mauracher has said Viking envisions CL-515s with advanced sensors for use in search and rescue and maritime surveillance roles. Viking was also considering a boom system for spraying insect repellent or oil suppressant, and a large cargo door for medevac work, he has said.