Air New Zealand has announced further changes to its executive team – the addition of a new role as well as the resignation of its finance chief.

Leanne Geraghty has been appointed to the newly created position of chief customer and sales officer, reporting directly to chief executive Greg Foran. 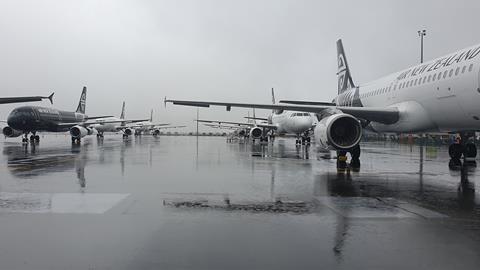 She is currently group general manager airports and is responsible for operations across 50 airports internationally, Air New Zealand states in a press release today.

“Leanne is an outstanding leader with a tremendous depth of industry knowledge having worked in the aviation and tourism industries on both sides of the Tasman for more than 30 years and led teams around the world,” Foran states.

“Her detailed knowledge of the New Zealand, Australian and Pacific Island markets in particular sets us up well for the post-Covid-19 international tourism recovery when the time comes.”

“We will shortly commence a global search for a successor, and I would like to thank Jeff for giving us such a long line of sight of his career intentions,” Foran states.

Air New Zealand stated in a stock-exchange disclosure on 25 September that it has begun drawing down NZ$900 million ($600 million) in standby funding from the government, secured in March. This provides liquidity support while it works out a plan for its business post-Covid-19.

“The [standby facility] was always intended by both parties to provide the necessary time for the airline to reposition its operations and facilitate the implementation of a long-term capital structure.”

“Assuming there are no further material adverse developments, the company is expecting to complete the strategic capital structure review by early 2021 and be in a position to proceed with capital raising to be completed before June 2021.”

The carrier disclosed that the government has affirmed its commitment to maintain majority shareholding in the airline and its board is “engaging constructively with the [government] in its capital structure and funding discussions”.