In the newly created role, Hannifin will focus on sustainability across Air New Zealand’s business, as well as its greater focus on the environment, says the carrier. 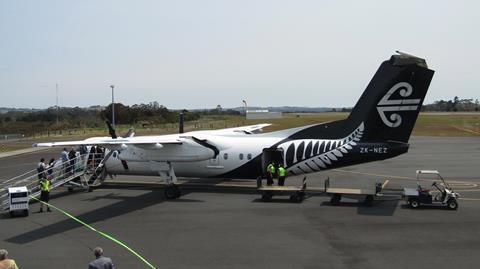 An Air New Zealand Q300 in 2020. Eventually, the carrier aims to replace its turboprop fleet with zero emission/’novel propulsion’ aircraft

“Kiri’s experience in driving change across the supply chain, engaging customers via tangible measures such as removing plastic bags from stores and diverting food waste from landfill will help our efforts move to a new level.”

Prior to assuming the chief sustainability officer position, Hannifin served as the director of corporate affairs, quality, health, and safety.

In late 2021, it outlined plans to eliminate carbon emissions on its short-haul domestic network, which it now serves with turborprops.

In a Product Requirement Document (PRD), the carrier called on the aerospace sector to issue proposals for zero emission/’novel propulsion’ aircraft. The term ‘novel propulsion,’ contends Air NZ, captures a range of new technologies such as hydrogen/battery electric, hydrogen combustion, or hybrid.