Australia’s Alliance Aviation saw revenue climb 11% to A$170.1 million ($122 million) in the first half of its 2022 financial year, but costs associated with fleet growth resulted in it swinging to a loss.

The carrier says its strong topline performance reflects record contract revenue in the six months to 31 December 2021. Contract revenue rose 21% to A$128 million during the period. 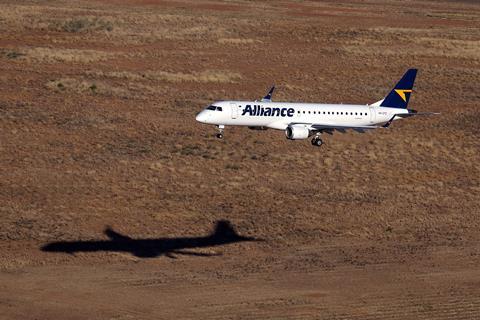 Alliance attributed the losses to investments in its next phase of growth, which includes the full deployment of its Embraer E190 fleet. It calls the E190 integration a “step change for the group from both an operational and financial perspective.”

This resulted in its reporting a statutory loss. This aside, it says, the underlying result is a pre-tax profit of $20.7 million.

Alliance adds that Qantas has exercised 10 of its 18 options to wet lease E190s. The coronavirus pandemic, however, has hurt the utilisation and employment of these aircraft, pushing back revenue expectations.

Looking forward, Alliance says it is well placed to take advantage of domestic travel demand both through continued charters from the resources sector and Qantas wet leases. It notes the “significant tenders underway in resources sector.”